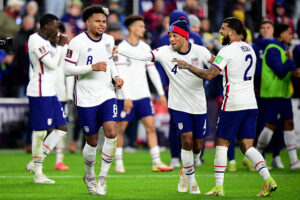 The United States defeated Mexico for a third time this year on Friday and it was yet another dos a cero to remember in Ohio. This time played in Cincinnati, the Buckeye State made its compelling case once more for being the eternal home of USMNT’s toughest World Cup Qualifiers. It brought the atmosphere, it brought the ‘home’ support, and it brought the win.

Cincinnati provided an enthusiastically pro-USA crowd. In the days and weeks preceding November 12, there was constant consternation over the state of it. Would it be pro-USA? Or would USA fans be drowned out once more, outnumbered by the sizable quantities of the El Tri loyal and Mexican-Americans living in the United States?

The United States Soccer Federation chose its location carefully, avoiding the large coastal cities and locations where they knew El Tri support would be strongest. They doled out tickets to US Soccer Insiders and official members of the three US Soccer supporter groups first in an attempt to ensure the atmosphere would propel on the United States.

Their manipulation of fate in the stands succeeded. There were, of course, large numbers of Mexico enthused fans. And they were welcomed in an atmosphere of friendly and loving rivalry. But they were outnumbered and out-cheered by what was unreservedly a pro-USA crowd.

Having personally been to several qualifiers this cycle, as well as the USA vs. Mexico, matches in the United States in past, where the El Tri fanbase had the upper hand by far, this was a uniquely and notably USA crowd. And it made a difference to the players.

Thanks for the love, Cincy!

The United States Didn’t Just Win, They Played to Win

The United States didn’t just win, they played to win, and they did so in a confident, convincing style. On paper, the United States has had at least equal footing with their rivals since long before Friday.  But the perceptions, style of play, and cultural sporting identities differentiating the two had historically left many feeling otherwise. Friday’s performance wasn’t simply a victory. It was a victory of feeling that the next chapter of United States sporting identity had finally arrived.

The United States’ fanbase is more educated in the sport, more diverse, and more demanding of results than generations before. They insist on seeing the style of soccer they feel this team capable of exhibiting for perhaps the first time. They want ‘beautiful football’, not simply victories eked out 1-0 on a set piece after an ugly run of play.

Friday’s match delivered that. It wasn’t always beautiful, but it was gorgeous in many places; we dictated match rather than reacted to it, and the style and confidence were convincing.

Youth and inexperience was not an issue

But on Friday night, youth was part and parcel of the momentum on our side. It pointed toward a much different story.

Mexico fielded an ‘experienced’ team. Their experience was outmatched. A starting lineup with two 18-year-olds and an average age of just past 23 ran the match against a team of elder veterans of ‘experience’. Standout performances came from leaders who were needed, alongside the powerful youth impact of players like 18-year-old Yunus Musah and 21-year-old Timothy Weah.

After being out with an injury since the Honduras qualifier in September, Christian Pulisic entered the match for Brendan Aaronson in the 69-minute mark and scored just five minutes after that. The energy from Pulisic’s entrance and the immediate goal was palpable from the press box, spread through the fans in the stadium, and turned the tide for Mexico that night.

The goal came from a beautiful cross from Timothy Weah, who’d had a standout performance and had been creating opportunities for the finish Pulisic delivered all night.

The pace of the match changed with the goal. It felt ever more decidedly in the USA’s direction. If Mexico had any pretense of equalizing, Weston McKennie dashed those hopes with a second US goal in the 85-minute. This goal meant that the United States defeated Mexico for the third time this year.

The United States finished the match in first place in Concacaf, but sit just four points north of fourth

With this result, the United States took hold of first place in the Octagonal. But there remain seven matches left to tackle and their spot is just three spots north of the fourth-place team. The race remains tight, despite the confidence and cushion the win in Mexico provides. To echo the sentiment that both Berhalter and his players relay to the press, this team needs to stay focused, and take each match in front of them one game at a time.