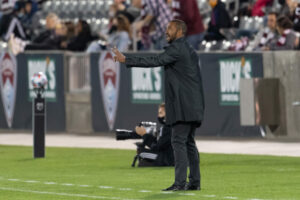 COMMERCE CITY, Colo. – Colorado Rapids hosted fellow MLS originals FC Dallas on Saturday. The Rapids were coming off their first loss in three games. Dallas were last in the Western Conference coming in. The struggles would continue for Hoops as a Tanner Tessmann own goal summed up the night.

FC Dallas Blown out in Colorado Off Tanner Tessmann Own Goal

The game got off to a frenetic start. Less than a minute in Franco Jara had an open header that was right at goalkeeper William Yarbrough.

Colorado opened the scoring on 13 minutes. Lewis created a turnover at midfield. He crossed the ball to the top of the box. Jack Price gathered it and found Keegan Rosenberry. With space in front of him, he dribbled forward and slotted the ball into the far bottom corner.

Nicolas Mezquida drew a penalty after a VAR review in the 39th minute. He was denied by goalkeeper Jimmy Mauer from point blank range, but take down in the process. Mauer made up for the mistake by saving Diego Rubio’s take from the penalty spot.

The PK went out for a corner that Colorado eventually scored on. The ball was recycled to Auston Trusty who found himself surprisingly out wide. He cut inside and shot, with Mauer making the save. The rebound went right off Tanner Tessmann and in.

Dallas barnstormed the Rapids penalty area to start the second half. Substitute Paxton Pomykal had the best look in the 53rd minute, but couldn’t beat Yarbough to the corner of the goal.

Michael Barrios scored against the run of play in the 71st minute against his former team. He ran down a long ball to the corner, dribbled to the front of goal and found the top corner.

.@austheboss3 has his shot deflected in!!!

Shades of George John: The Tanner Tessmann own goal remined both fanbases of the own goal that won Colorado MLS Cup. It was unlucky and certainly unintentional from the Homegrown. That play summed up the night for the visitors.

Jara-Wilson rivalry: Wilson and Jara had some good battles in the first game of the season. Wilson made several key defensive plays. Jara picked the ball from the Scotsman on a play in the second half, hitting the crossbar. The two got into a shoving match later, both earning a yellow card. This could become a battle within this rivalry.

Barrios revenge tour: Barrios now has 2 goals and assists in three games tonight. His goal in this game was his best goal contribution yet and had to feel good against his former club.

The post FC Dallas Blown out in Colorado Off Tanner Tessmann Own Goal appeared first on Last Word On Soccer.