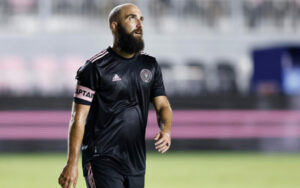 It wasn’t the opening day that FC Cincinnati was hoping for at TQL Stadium. The Ohio-based club opened up their new home grounds on Sunday afternoon, bringing Inter Miami to the middle of the state. However, the new stadium was christened with a loss, with Inter taking home three points.

Gonzalo Higuaín scored the game-winning goal in the 85th minute to secure the victory. It was his second goal of the match, with his first coming in the 38th minute.

Inter Miami got off to a hot start on the road with a goal from Brek Shea only seven minutes into the contest. FC Cincinnati was down by two heading into the locker room at halftime. However, Cincinnati did mount a comeback. Álvaro Barreal scored in the 59th minute off a chip over goalkeeper John McCarthy.

In the 82nd minute, Nick Hagglund scored the equalizing tally off a corner kick header.

However, Higuaín scored the game-winning goal for Inter Miami three minutes later. Higuaín was sandwiched between two defenders and still managed to get his shot past former LAFC goalkeeper Kenneth Vermeer.

What’s Next for Miami and Cincinnati?

For Inter Miami, Phil Neville’s squad will look to build a winning streak against the Chicago Fire on Saturday, May 22. Meanwhile, Cincinnati will look to break their win-less streak of three matches, taking on Montreal on Saturday.

The post FC Cincinnati open up TQL Stadium with loss to Inter Miami, 3-2 appeared first on Last Word On Soccer.