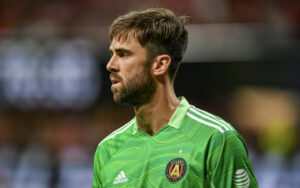 In the first game of the post-Gabriel Heinze era, Atlanta United drew 1-1 away at FC Cincinnati.

Rob Valentino’s men had to come from behind after Lucho Acosta had put the home side 1-0 up in the 62nd minute. But it only took the Five Stripes eight minutes to respond as Ronald Hernandez fired home his first-ever goal for the club after some great work from Brooks Lennon on the right.

The result leaves Jaap Stam’s side 11th in the Eastern Conference, one place and one point below Atlanta United with a game in hand.

Here are three things we learned from the match:

1. Battle of the goalkeepers

Though this game finished 1-1, the scoreline could have been much higher if not for the efforts of goalkeepers Kenneth Vermeer and Alec Kann.

Though he’s come in for plenty of criticism during his time in MLS — both for Cincinnati and, previously, LAFC — Vermeer was in top form on Wednesday, pulling off a number of acrobatic saves to deny powerful Atlanta United efforts. Jake Mulraney was particularly frustrated by the Dutchman, who twice thwarted his attempts to find the net, while the likes of Marcelino Moreno, Jackson Conway and Josef Martinez were also denied. When Vermeer was finally beaten late into the second half, there was little he could do as Hernandez crashed into the box and smashed the ball home.

At the other end, Kann’s stock has been increasing recently as he continues to impress in place of Brad Guzan, who is on international duty. Wednesday night was no different, with Kann making a total of five saves on the night, each of which came inside the box, with some from extremely close range.

Sure, there were some hairy moments in possession for the 30-year-old, and he was fortunate to see an effort come off the post and go just wide via his back. But Kann earned his luck with quick reactions and decisive action when crosses came into the box.

Where we should have been treated to a goalfest, these two stoppers ensured both sets of fans walked away somewhat frustrated.

After a slow start, Luciano Acosta has been picking up momentum recently for FC Cincinnati, bagging two goals and two assists across his last four outings to help his side to five points during that time. The confidence he carried into this match from his recent form will only have been enhanced by the fact that he was playing Atlanta United, his favorite opponent.

Across eight career appearances against the Five Stripes prior to Wednesday night, the Argentine had notched two assists and, most impressively, five goals — more than any other opponent he’s faced.

After threatening to explode into life all evening, Acosta finally extended that record in the 62nd minute, and in style, finding space behind the Atlanta backline before chopping inside to evade a tackle and curling the ball inside Kann’s far post.

Ultimately, the goal was only good for a single point. But there’s no doubting Acosta has Atlanta’s number.

3. Moreno off the leash for Atlanta United

With the performance Marcelino Moreno put in on Wednesday night, some Atlanta United supporters were quite rightly asking if the Argentine had been fitted with some form of inhibitor chip during Heinze’s time at the club. All too often, Moreno would lose the ball cheaply, make the wrong decision or run down a blind alley.

But on Wednesday, Moreno grabbed hold of the game and took it firmly to Cincinnati. The former Lanus man drew seven fouls, won all 12 of his ground duels and completed all five of his attempted dribbles on the night, while it was he who led practically every single one of the Five Stripes’ counter-attacks, driving the ball forward with purpose and putting Stam’s men on the back foot.

All action for #ATLUTD

And when Moreno did get into dangerous areas, he didn’t disappoint with his decision-making, creating no fewer than four chances on the night while also hitting the target with two of his four shots and hitting the woodwork once.

This was an all-action performance from Moreno and exactly the sort of drive he was meant to add to the Atlanta United midfield when he was signed in the first place. Long may it continue.