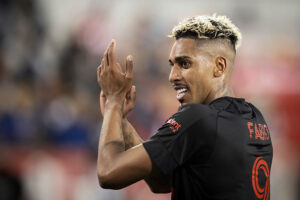 HARRISON, NJ – A 91-minute goal by Fabio puts the Red Bulls up to sixth with a dramatic 1-0 win over CF Montreal at Red Bull Arena. Both teams had golden chances in the first half, Casseres hit the post in the second half. Montreal remains alive despite the loss.

New York makes only one change to the team that lost 1-0 at DC United. Wikelman Carmona is reinserted in the lineup over Fabio, the rest of the team remains unchanged. John Tolkin is back on the bench as well as Lucas Monzon who made his MLS debut at Audi Field.

Montreal makes numerous tweaks to the side that advanced to the Canadian Championship final over Forge FC on penalties. Kamal Miller and Rudy Camacho are in defense alongside Joel Waterman. Emanuel Maciel and Mathieu Choiniere are in midfield over Mustafa Kizza and Rida Zouhir. The formidable front three of Djordje Mihailovic-Joaquin Torres-Ibrahim Sunusi lead the attack.

First Half: A wasteful half for both Red Bulls and Montreal

Carmona came close to opening the scoring inside the first 90 seconds, but his low drive was parried away. Ibrahim had a golden chance one on one against Coronel, but the Brazilian was equal to his low strike.

Klimala had a chance of a poor giveaway to put the Red Bulls in the lead but his effort was blocked high for a corner kick. The ensuing set-piece resulted in nothing. Gutman had his effort run wide of the far post off a nice one-two with Casseres Jr. This first half has been cagey and at times wasteful given the quality of chances for either team. It’s going to take a moment of individual greatness to separate the sides in a huge six-pointer.

Both teams recorded five shots apiece, Montreal has got the better run of play working the ball with a nice 81% passing rate. With New York at 65% passing success, they need to at least hold the ball better in order to orchestrate better-attacking chances.

Fabio enters the match over Carmona for more punch in attack. The action stalled a bit with both teams looking to find a breakthrough. Klimala tried to beat the keeper off his line from over 40 yards but went wide. Caden Clark entered the match for Edwards in the 67-minute. Seconds later Cristian Casseres hit the foot of the near post after the entry pass done by Clark. Montreal made their first substitution, Lassi Lappalainen entered the match for Ibrahim.

Andres Reyes earned the games’ first yellow card for a foul. Zorhan Bassong came into the game for Brault-Guillard. Frankie Amaya entered the match for Casseres Jr. Youba Diarra also entered the match for Yearwood. A breakthrough goal came in stoppage time for the Red Bulls. A cross to the back post found the head of Clark who nodded it to Fabio who headed it in at the far corner to open the scoring. The 90-minute decider tore the roof off the building. It would finish with the Red Bulls winning 1-0.

Incredible scenes as Fabio keeps the Red Bulls above the line. The game looked destined to be scoreless, a draw that wouldn’t have hurt either team. But the individual moment from the Brazilian puts New York in sixth. Wow.

Montreal isn’t dead yet. They deserved a point in truth. Montreal hosts Houston and Orlando to finish the season, they are in good shape still.

An enormous week yet remains. New York has to still play Atlanta and Nashville, while Montreal is home to finish. Decision Day will be one for the books as the drama doesn’t stop.