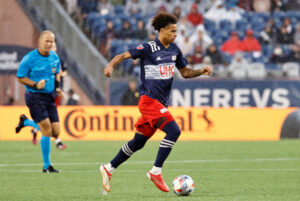 Pre-Match Thoughts: The absence of Carles Gil is the headline and rightly so. The leading MVP candidate missed this clash with the Union due to a slight knock but that didn’t stop New England from being goal dangerous. It was the Shield leaders vs the Shield holders at Gillette Stadium and the return of Tajon Buchanan and Matt Turner from Gold Cup duties was a difference maker.

The line-ups (no Carles Gil!)

As previously mentioned, there was no Carles Gil for the Revs and so it was Matt Polster and Tommy McNamara in midfield instead. Gustavo Bou and Adam Buksa continued to lead the line together and Turner reclaimed the gloves from Brad Knighton. Jon Bell still missing from the matchday squad!

On the other hand, Jim Curtin made a few changes that saw a number of youngsters introduced. Paxten Aaronson, brother of Brendan started for the Union as did seventeen-year-old Quinn Sullivan. Andre Blake was between the sticks following a Gold Cup campaign of his own with Jamaica. Jamiro Monteiro was still absent from the matchday squad as the case for his departure becomes stronger and stronger.

The game, as it happened

New England began the game with a quick tempo and even without Carles Gil on the field, they took an early lead. Matt Polster played a one-two with midfield partner McNamara and then calmly converted beyond Blake. This was Polster’s first game of the season and his first in a Revs shirt in fact!

Philly still possess the Supporters’ Shield of course but their recent form has shown they are very unlikely to retain the title. The youth production never stops regardless though and it was a certain Aaronson who netted the leveller. He looked neat on the turn and then showed very quick feet to open the space up. Aaronson finally did what you have to do to beat Matt Turner and pick out the top corner. His first MLS goal too, 1-1!

It seemed as if the two would go into the break all square but Tajon Buchanan had other ideas. The Canadian has been one of the most electric players in the league so far this season and he continued to show this at the Gold Cup. He has played to such a high level that reports of a move to Club Brugge for between $5 and $10 million dollars are intensifying with every outing. He took on Leon Flach and the Union man made the mistake of diving in, Buchanan going down and drawing the penalty. With Carles Gil not on the pitch, the responsibility fell at the feet of Bou. His original effort was oh so tame and kept out easily by Blake but La Pantera responded quickly and tucked home the rebound with a huge sigh of relief.

Matt Turner heroics? Is water wet? He is far and away the best goalkeeper in MLS and he continues to announce this around the league. Glesnes went driving forward from defence and when he slid in Sullivan, a second equalizer was on the cards. Turner had other ideas though, he got down quick to deny the teenager and keep the Revs’ lead intact.

Carles Gil is the man of the moment in New England and whilst he didn’t feature in this one, Ilsinho and Ale Bedoya were both sent on shortly after Sullivan’s close call. Two very technical players who make up for a lack of pace with magical feet.

Buchanan won the penalty and it was his dribbling that time-and-time again stretched the team from Pennsylvania. The likes of Flach, Mbaizo and Jack Elliott were all having to be on red-alert when the wonderkid had the ball under his spell.

Philly kept pushing in the late stages for a second hit-back but Turner and co kept coming up with a response. If Kessler and Farrell were unable to deny the shot then last year’s MLS goalkeeper of the year would come up with the goods.

Even as a strong Shield contender, missing a player of the caliber of Carles Gil can easily dismantle the rhythm. Bruce Arena’s squad have continued to get results without Turner, without Buchanan, without Bou, and they’ve done it again, this time without Carles Gil.

Sporting Kansas City and Orlando City both drew this weekend whilst Schmetzer’s Sounders didn’t play so the Revs’ hold on top spot becomes all the more firm. These three points see New England move six points clear of SKC in the overall standings, ten clear of Orlando in the east. Meanwhile, Philly are fourth in the east. They’re on the same tally as Nashville who suffered a late loss to Inter Miami and NYCFC who let a 2-0 lead slip, only managing a point against Toronto.

The Revs keep marching on even though they’re missing All-Star Carles Gil!

The post Even without Carles Gil, New England Revs overcome the Union at Gillette Stadium! appeared first on Last Word On Soccer.