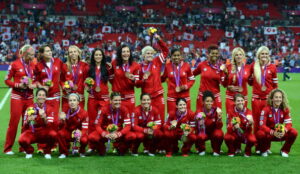 Eva Havaris is a prominent sports businesswoman. She is currently the Executive Vice President and Chief of Staff of York United FC. Eva Havaris is also the Lead Strategist and Confidante of Eva Havaris’s Leadership Mindset Design. Eva Havaris wants to make a difference in leadership and to improve the inequality that exists between men and women. She also has experience with Rugby Canada, Taekwondo Canada, Equestrian Canada, and the Canadian Premier League (CPL).

In the first part of the interview, Eva Havaris talks about she got involved with women’s sport. She also talks about the Canadian Women’s National Team and leadership.

How did you get involved with women’s sport in Canada?

I played sports my whole life. I went to the States for division one, and I came back to Canada to finish my undergrad. My coach at the time was working towards Ph.D. in Sport Management. He was the one who introduced me to graduate work in that field. I studied the business side of sports; I was not aware that this was even an area that you could study. My career really took off from there in terms of working in sports, but I have had been in sports my whole life.

What was it like being a varsity head coach/assistant coach for women’s soccer in Canada?

Fantastic! So, I started coaching immediately after I was done playing and joined Western as an assistant coach first. It was a fantastic experience there as a lot of my teammates were still playing at that time. So, there was a lot of respect and trust that had been built. And then I got my first head coaching job at Fanshawe College. And I ended up having an all-female staff. I recruited a few of my teammates that had graduated who had the leadership skills and the ability to coach and to give back to the game. We had tremendous success.

So, from Fanshawe, we went to UofT, had a lot of success there as an all-female staff. And yeah, it was a great experience. And I would say for the athletes as well, just a great experience for them to have female leaders and female coaches that, you know, had not been out of the game for too long, that could really relate to what they were experiencing as athletes.

How important were the 2012 Summer Olympics, and the 2015 FIFA Women’s World Cup? In terms of the growth and popularity of the Canadian women’s national soccer team?

It was massive. I was fortunate enough to be in London for the 2012 Olympics as I was there for Taekwondo. Because of my love of soccer, I had some free time to go and watch some of the games. I was at the game when Canada won their bronze medal. I also watched the semi-final when they played the US. It was really a game-changing moment for women’s soccer in the country for sure. The performances, the team effort, just everything that came out of that really put women’s soccer on the map in this country.

I remember being at the stadium when they were playing for the bronze medal game. And there were so many people from around the world like me, who were wearing Canadian team clothing and flag. Many fans were in the stadium from around the world that just kept coming up to me and kept saying you guys were robbed, you were robbed. They said that Canada should have won because of the call by the referee in the semi-final. So, I think it not only left a huge legacy in Canada but also around the world. It made people aware of our women’s national team players.

How do you think Canada performed at the SheBelieves Cup despite missing several players?

I thought to be honest the performances of the new younger players were really encouraging, and many of them got their first national cap. I think it was great to see how some of the up-and-coming players were able to fill some of the crucial positions around the field. There will be some players who will be retiring probably in the next year or even after the Olympics in Tokyo. So honestly, I thought it was promising.

The coach did not have much time to prepare, even if she had known the team well. Some gaps the team needs to be worked on, sort of historically there are still challenging that they need to work on today, but hopefully, they can start to make some progress.

Why did you create the unique platform, programs and services called Leadership Mindset by Design?

When I began my career, I had a lot of success early on. I became a CEO when I was 30 years old, also ran two national sport organizations in my 30s. It accelerated quickly with incredible opportunities. At the same time, I faced several challenges for being young and female and leading some decently sized national sport organizations. After all those years of management experience, I always wanted to assist young leaders early in their careers with advice, guidance, or mentorship.

I realized after I left equestrian and moved into the Canadian Premier League, that I had some time to start to formalize this business. I realized that I was kind of my first client because I had to coach myself through those years, like, through my 30s. I really had some great mentors and allies around me, but it was not quite the same as having a confidant or a person that could be a go-to person for me through the critical years of my career. So that is where this idea came from.

I had to redesign myself and had to shift my mindset. I had to face some significant challenges, and really worked through those challenges and came out stronger. Now it is about recognizing some of those moments. It might have been easier if I have had someone like myself to help me through my career journey.

What are some barriers you feel women face when it comes to leadership or leadership positions?

Well, the statistics are obvious. There is a lot of research out there on this and lots of data out there that shows that women do not tend to progress as easily into leadership roles. We are certainly behind in numbers and equity and inequality in that regard. It is one of the challenges of women sort of making it to the top and making it to the pinnacle and finding themselves in executive leadership positions. There are women out there that are extremely successful in those roles, but I think it is few and far between.

I think one of the other challenges we face is because of that. It is often that we are really tested. We must continue to be tested; we must continue to prove ourselves. It is just sort of a constant of proving yourself, your value, your competency, your qualities, and your skillset to lead. I think it is something that at least I have experienced firsthand.

The post Eva Havaris from York United FC on CanWNT and Leadership Part One appeared first on Last Word On Soccer.