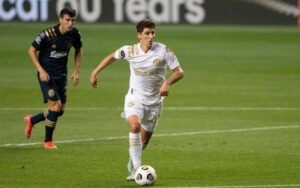 Emerson Hyndman says he’s enjoying the connection between himself and Santiago Sosa in the Atlanta United midfield.

Sosa only arrived at the club from River Plate in February but has already wowed Five Stripes supporters with a number of eye-catching performances.

Among Atlanta players with more than 15 passes attempted, the Argentine midfielder ranks second behind only George Bello (91.6%) in terms of pass accuracy (89.69%) in MLS play. Meanwhile, Sosa has played more long passes (20) than any of his outfield teammates.

Moreover, the 22-year-old has shown ultimate composure with the ball, as well as bravery and intelligence without it.

Sosa opened his Atlanta United and career goal scoring account in style during a 1-1 CONCACAF Champions League draw with Philadelphia Union on Tuesday. Though it wasn’t enough to overturn a 3-0 first-leg deficit, it did round off another eye-catching performance.

After the match, manager Gabriel Heinze was reserved in his praise, but admitted Sosa is “adapting well” to his new surroundings.

“It’s hard for me to talk about individuals,” he responded when asked about Sosa’s performance on Tuesday. “I prefer to talk to them face-to-face. But I believe Santi is adapting well day-by-day, and I think that’s good news for Atlanta.”

Midfield partner Hyndman was much more forthcoming with his appraisal, speaking of the “connection” he’s already enjoying with Sosa, and the balance he offers to the team.

“He brings a lot of balance to the backline and into the midfield. He works in between, brings a lot of composure and calmness, and brings a good passing range. For us, he’s a very important player. He chipped in with a goal tonight, he has that in him.”

“I really enjoy playing with him. I think we have a pretty good connection on the field and it’s something that can just grow.”

With CCL commitments now over for another season, Atlanta United can now solely focus on MLS play. The Five Stripes face Inter Miami in Florida on Sunday at 1 p.m. EST.