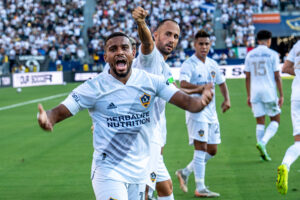 The Los Angeles clubs played to a 1-1 tie in El Trafico Sunday afternoon.

The stalemate put a damper on a day of celebration where the Galaxy unveiled club legend Landon Donovan’s statue, but could not reward him or their fans with a win.

It was typically El Trafico though; which meant high drama on the field.

As has become something of a habit, the Galaxy was forced to come from behind again after falling behind to a set-piece goal in the 11th minute.

The Galaxy response was swift, with Samuel Grandsir tying the game on 19 minutes for his third goal this year.

The Frenchman has become one of the Galaxy’s most reliable performers, being the only player that has appeared in every match for the club this year. He was a constant threat on the left flank and was rewarded for his work with a well-taken goal.

He took advantage of an inch-perfect Victor Vazquez pass, Vazquez’s fourth assist of the season, to round LAFC keeper Jamal Blackman and fire home in front of the Angel City Brigade.

Two goals in the first 19 minutes promised more from the LA clubs, but although there weren’t goals, there was plenty of action.

What followed was a chippy but exciting match.

Both teams hit the woodwork, the Galaxy twice, and went at each other in an open-ended game until the final whistle.

Yellow cards went out like Facebook did today, and LAFC was extremely lucky not to have a man sent off and a penalty awarded against them.

But when it was over, neither team could win all three points and Los Angeles bragging rights.

The tie ensures the Galaxy won’t lose to their city rivals this year unless they somehow meet in the playoffs though.

Unfortunately, it also means the Galaxy hasn’t won since the 1-0 victory away at Minnesota on August 4th and has slipped in the table to sixth place.

“Every game a final… again.”

“Now we have a break on. We have six games left that it’s six finals. It’s still on us because we are we are still in the playoffs, but everything is more tight,” the Spaniard explained.

Now winless in nine, however, the Galaxy is running out of time to pick up points and even further away from a home game in the opening round of the playoffs.

Hopefully, the coming international break Vazquez mentioned will allow the Galaxy to regroup.

With a massive game against Portland, the Galaxy play possibly their most important match of the season next.

A win will also surely set off the celebrations that should have happened at Sunday’s Donovan statue unveiling.

Samuel Grandsir makes his case: Grandsir scored his third goal of the season and was dangerous throughout. More importantly, he has become the most consistent name on the team sheet and someone Vanney can count on.

Another El Trafico tie: This game has so much tension attached, that it seldom lives up to the billing. This one wasn’t that. With yellow cards, penalty shouts, and shots that hit the post galore, this is one El Trafico that lived up to the hype.

Playoff Push: Six games left means that Galaxy fans are getting nervous. The players have said that each game is a final; with the Western Conference so tightly packed together, any dropped points now mean potentially missing the postseason.