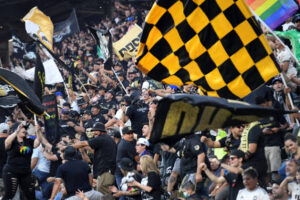 LOS ANGELES – Los Angeles FC. LA Galaxy. El Tráfico. It’s a rivalry that needs no introduction to MLS fans. On Saturday afternoon, the cross-highway rivals met at the Banc of California Stadium. Both teams were missing their star Mexican International forward and in need of a win. Four goals in the second half made for more memorable El Tráfico chaos.

The game got off to an energetic start. LAFC had some good passing sequences and created many chances in the first half. The Galaxy made some key defensive plays and opened things up on the counter.

Just a minute into the game, Diego Rossi could have drawn a penalty with Julian Araujo appearing to clip him in the box from behind. Nothing was called and VAR did not get involved.

The Gs got on the board first against the run of play 20 minutes in. Jesús Murillo misplayed a cross into the box and Dejan Joveljic was able to pounce, finishing awkwardly.

Just before halftime, Cristian Arango equalized, and deservedly so. The Columbian was taken down in the box by Niko Hämäläinen. He finished well, scoring off the post.

The game went back and forth throughout the second half. Brian Rodríguez broke the deadlock just before the hour mark. After a flurry of chances in the box that saw Jonathan Bond stand on his head, Rodríguez dribbled through multiple defenders to go 1-v-1 with Bond and blasted it past the keeper.

Just five minutes later, Joveljic made it 2-2. Julian Araujo and Sebastian Lletget combined in transition to set the striker up, who beat Tomás Romero with a shot to the far post.

LAFC appeared to get the winner just two minutes after that. Rodríguez had a tap in after Bond gave up a rebound on a shot from Diego Palacios at the top of the box.

Greg Vanney made some changes and subs to try and rescue the match and they did with four minutes left in regular time. Pinging the ball around in the final third, Efraín Álvarez played Araujo to the end line. He crossed into space for a wide open Kévin Cabral who finished.

The match ended 3-3 with LAFC controlling most of the play in stoppage time.

LIGHTNING STRIKES AT THE BANC.

Rodríguez and Joveljic: Both strikers got off the mark with surprising and impressive braces. This could be what they need to kickstart their seasons.

Losing streak ends: LAFC avoids a five game losing streak, which would have been the first in club history and just Bob Bradley’s second as an MLS head coach. In that regard, this was a much needed result.

Feel good result or dropped points: That said, this has to be seen as a draw that feels like a loss for LAFC. They had the lead twice in the second half and did not win. Still, both teams have stopped the bleeding and gotten a result in a derby match.