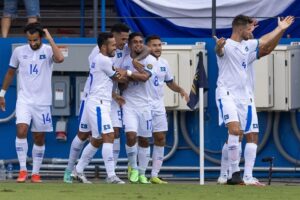 We’re now into the last round of group fixtures, and it’s El Salvador vs Mexico for the top spot in Group A. La Selecta have flown out the blocks with two late wins in the 2021 Concacaf Gold Cup. This includes their last game against Trinidad & Tobago. Hugo Perez’s men have put in a concerted effort thus far to dictate play with possession and press without the ball. Through two games, they’ve scored four goals by four different goalscorers.

Mexico finally got on the win column and scoresheet after easily dispatching Guatemala. Funes Mori bagged a brace before Orbelin Pineda put it beyond any doubt in Dallas. Hector Herrera has been very good in midfield and both teams are yet to concede a goal. It’s easy to forget. but El Tri is the defending champions of this competition. And it’s been a while since El Salvador beat Mexico, it last occurred in the summer of 2009.

Should El Salvador spring the shock, it’d be the first time they’ve ever clinched the top spot in a group at the 2021 Concacaf Gold Cup. The winner of this game gets the second-place team of Group D – Honduras, Panama, Qatar, Grenada.

El Salvador vs Mexico for first place in Group A

Judging by what one sees on the pitch, the two teams are enjoying their play. Yes, Mexico drew against Trinidad & Tobago but if it were another day, they would’ve routed them. They could’ve also routed Guatemala by more than three goals but were wasteful with the majority of their chances. However, Gerardo Martino knows what we want from his players and they are delivering for the most part.

They’re the highest-ranked FIFA international side (11th) in this Gold Cup (first in Concacaf) and it’s pretty easy to see why. They can hurt opponents in so many ways. It’s unlikely Martino switches things up with his lineup, but he could just unsettle the opponent.

El Salvador are heading to the @GoldCup Quarterfinals!

La Selecta pick up another 3 points against Trinidad & Tobago and book their spot in the knockout round! pic.twitter.com/ZRb7XBTuu7

El Salvador is the sixth highest-ranked team in the region (69th overall) and is playing well above expectations. Nobody could’ve seen this team raise their level of play, let alone win two straight matches to kick off the campaign. It’s a well-drilled side that does allow the odd chance or two that gives themselves a scare, something they’ll need to be wary of against Mexico. It’s a collective effort from everyone involved. But make no mistake, this has already been a tremendous Gold Cup for La Selecta.

Who holds the edge in El Salvador vs Mexico?

These two teams play similarly, controlling the game with possession and harassing opponents after losing it. The loss of Hirving Lozano hasn’t deterred Mexico thus far and could play the same lineup that defeated Guatemala. They will need more from guys like Efrain Alvarez and Jesus Corona, but Alan Pulido off the bench is a great wildcard to have.

Mexico will need to win the game in order to top Group A. However, El Tri is favored in this match simply by having better technicians in midfield on the ball. They also using decent pass combinations when inside the opponents’ 18-yard box. Their style breaks down the opponent to where they have little time to think of a defensive solution.

And this is where El Salvador comes in. Their pressing and ball pressure have been brilliant, and it’s why they own the majority of the ball in their games. Despite it being against lower-level competition, the fact that they’re executing their play in such a manner is a positive going forward. They too have wildcards on the bench like Alex Roldan and Walmer Martinez who change the game late on.

It would be nice to give the former a start, but it’s easy to keep a good thing going and not change the starting lineup. It’s a classic 4-4-2 versus 4-3-3 where the counter-attack plays a nice part in who wins. What else plays a part in who wins is who makes a mistake while in possession. Fan support will be in full force in Dallas. This should be a great game to cap off what’s been an intriguing group.

The post El Salvador vs Mexico for top spot in Group A appeared first on Last Word On Soccer.