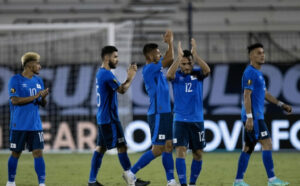 Wednesday night sees El Salvador take on Trinidad and Tobago as Group A action continues. La Selecta kicked off their campaign with a 2-0 victory over Guatemala in a game they dominated from start to finish. Trinidad and Tobago held on for dear life in a scoreless draw against Mexico. They’ve kept themselves alive to advance to the knockout stages while El Salvador are group leaders.

A win for El Salvador puts them in pole position to win the group, and puts Trinidad and Tobago on the brink of elimination. If Trinidad and Tobago win, it puts Despite being in the same region, this will only be the fourth ever meeting between the sides in this competition. The last time these two teams played was the classic 2-2 draw at Red Bull Arena in the 2013 Gold Cup. It produced arguably the best game of that tournament.

Form Book on El Salvador vs. Trinidad and Tobago

El Salvador are brimming with confidence heading into this game. Passing, pressing and leaving it late was the order in which they defeated Guatemala. Alex Roldan came on to make his debut and made an immediate impact in scoring from outside the box. That usually means you start the next match, but Hugo Perez may feel worried at the late chance Guatemala had at equalizing. Both goals came from substitutes, Joaquin Rivas grabbed the second goal with the last kick of the game. Perez may tinker and deploy Tony Rugamas up front over Jairo Henriquez.

One look at Trinidad & Tobago’s stats against Mexico could remind of you of soccer in the old ages. According to SofaScore — four shots the entire game, none on target. They amassed just 17% possession against Mexico using a defensive 5-4-1 formation that did its job. Speaking of doing the job, goalkeeper Marvin Phillip made seven saves to deny El Tri and grab a clean sheet. Looking to Wednesday night, Angus Eve will have to ask more of forwards Reon Moore and Kevin Molino to produce more attacking output. It’s admirable to defend for 90 minutes, but ultimately it does more negative than positive when it comes to putting a team in the best position to secure a result.

Much of the same? Or a shock result?

If this game goes as expected, both teams will repeat the game plans of their previous match. El Salvador will possess the ball and pass around the opponent, while the Caribbean side will defend with all players behind the ball. Phillip will have to produce another great performance in goal, and tactics will need to be spot on. El Salvador worked their pressing game to great effect against Guatemala, leaving them with little time on the ball. A similar outcome in this regard will tire out their opponents and see quality chances put on goal.

However, we’ve already seen Trinidad and Tobago defend with their backs against the wall. Wednesday night won’t be much different, but they do possess more of a threat than Guatemala. It’s safe to say this will be a more difficult game for both teams, at Toyota Stadium. This game may not be as important as the one eight years ago, but it’s just as important. A win for either side will go a long way towards making the knockout rounds.

The post El Salvador takes on Trinidad and Tobago looking to stay top of Group A appeared first on Last Word On Soccer.