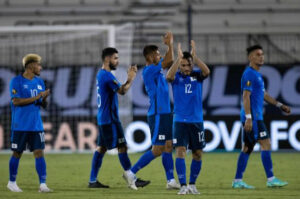 FRISCO, TX – El Salvador lead Group A after goals from Alex Roldan and Joaquin Rivas. Guatemala simply had no answers as La Selecta overwhelmed them. After a first half that saw Hugo Perez’s men dominate possession, the second half finally broke Guatemala. Now with a decent goal differential advantage, El Salvador will feel they have a solid chance of advancing out of the group, and maybe even topping it.

El Salvador make a few changes from their recent warm-up against Qatar. One change at the back sees Eriq Zavaleta from Toronto FC start over Roberto Dominguez at center back. Narciso Orellana starts at the heart of the midfield while Juan Portillo gets the nod on the wing over Tony Rugamas. Seattle Sounder Alex Roldan makes the bench.

Guatemala switch things up as of their latest game against Guadeloupe. Jose Morales and Jorge Aparicio are in midfield while Jairo Arreola leads the line over Darwin Lom.

First Half: Possession, wasteful chances in a scoreless half

The plan was clear from the opening whistle, El Salvador would dominate possession. They tried working the ball through multiple areas, mostly through the left flank. The lack of punch, even playing with two attackers up front has been surprising.

Guatemala are trying despite the circumstances. They’ve barely got a sniff of the ball throughout the opening 45 minutes. When they do though, El Salvador have pressed and dispossessed them.

Frustration has creeped into Guatemala a bit given they have two yellow cards. Furthermore, no corner kicks taken as well highlights how little they’ve manage to create chances. Truth be told, there weren’t many moments from this opening half. As it trends, El Salvador will have to be more clinical on the ball as they get forward. Guatemala may have to hold on and be solid defensively for a draw, they’ll have to work extra hard to create any sort of opportunities to start the second half. They are being dominated in nearly every statistical category.

No subs for either team to start the second half. Later on, Guatemala would make their first sub, Oscar Santis on for Arreola. They also changed to a 5-4-1 formation without the ball to be more defensively sound.

The fitness levels have taken their toll on Guatemala. Morales and Ceballos were nearly stretchered out due to cramps. Luis de Leon and Robin Betancourth entered the match to replace the pair. Joaquin Rivas entered the match for Perez, Darwin Lom came on for Aparicio.

The opening goal came in the 81-minute. The ball pinballs around the box and Roldan rockets one outside the area to score on his debut for El Salvador. A real beauty of a finish, as the pressure finally pays off for La Selecta. Portillo came on for Monterroza and Martinez for Henriquez.

Gonzalez made a tremendous save to deny Guatemala a possible late equalizer. Minutes later, Martinez ran down the flank and offered up an assist on a platter for Rivas to finish off, doubling La Selecta’s lead. After 97 minutes, El Salvador grabs a two-goal victory.

Relive their big win in our 90’ in 90” highlights #sponsored pic.twitter.com/boOJtREEJz

For almost the majority of this El Salvador Guatemala match, La Selecta did everything but score. Once they did, courtesy of the Roldan rocket, the entire team fed off the momentum. Hugo Perez’s gameplan worked to perfection, pressing the opposition, using the wings and overwhelming Guatemala. The side who replaced Curacao looked like a team that just found out they’re playing in a tournament. It’s unfortunate, they’re playing seemingly an emergency squad that did little-to-nothing in this match. They may end up leaving with nothing should they continue in this fashion, they play Mexico on Wednesday.

But El Salvador get the plaudits for their performance. They lead Group A with three points, and more importantly, have two goals in the goal difference category. That always seems to be the tiebreaker in tight groups, and El Salvador will feel good about their chances of advancing. Against Trinidad & Tobago, much of the same will be required. Possessing and knocking the ball around to tire the opponent, utilize the wings and keep up the pressure to get in a goal or two. Their opponents Wednesday defended for their lives and could do it again. Alex Roldan may have to start next game after his well-taken goal. Should that be the case, well La Selecta can feel confident of getting another result.