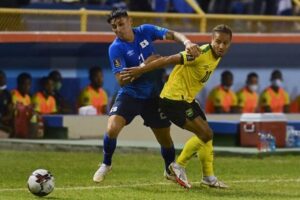 SAN SALVADOR – The 21st all-time meeting between El Salvador and Jamaica finished in a dramatic 1-1 draw. Goals by Michail Antonio and Alex Roldan scored in the 82nd and 90th minutes respectively. However, both teams are stuck on six points each, five back of Panama in fourth place.

El Salvador bring a few surprises to the starting eleven. Eriq Zavaleta is back at the heart of defense in a welcome boost, he’s been out of international duty since the 3-0 loss at Canada in September. The other surprise sees Brayan Landaverde start in midfield, he also took part in the recent friendly defeat against Bolivia next week. The dangerous forward line of Hernandez-Rivas-Henriquez leads the line.

Jamaica go in attack mode for this game. Andre Blake in goal as usual, Kemar Lawrence and Adrian Mariappa as full-backs. Bobby Reid, Kemar Roofe, Shamar Nicholson and Leon Bailey all start. Michail Antonio, Ravel Morrison are on the bench. Their first game in nearly a month.

First Half: El Salvador, Jamaica canceling each out in scoreless half

The tactical plans for both teams were laid out clearly. Both teams trying to press while El Salvador looked to maintain a bit more possession. However there wasn’t much in the way of attacking.

Only one shot was recorded by each team halfway through the opening half. Until in the 37th minute when El Salvador clipped the crossbar twice within seconds. Anthony Grant earned the first yellow card of the game for a foul in midfield. El Salvador outshot Jamaica six-to-three and with most of the nine total efforts coming in the last twenty minutes.

It had been a sluggish 45 minutes all around, sixteen fouls to boot. Jamaica’s attackers simply couldn’t find a flow to get into the game. El Salvador are struggling in their own right even with more possession in hand. Second half subs could tell the difference in this crucial game in the standings.

Roberto Dominguez came on for Zavaleta, the first El Salvador sub to start the second half.

Marvin Monterroza came in for Duenas, Darwin Ceren also on for Landaverde. Michail Antonio came on for Roofe. He would open the scoring, he got the ball and ran at the opposition. Sped past Rodriguez and chipped Gonzalez to give Jamaica the lead.

Walmer Martinez entered the match for Christian Martinez. Liam Moore came on for Jamaica. A 90th minute equalizer by Alex Roldan, a header in the box lifted the roof off the stadium.

The game finished a goal apiece.

Late goals tell the story. Eriq Zavaleta was subbed off to start the second half so his fitness will be monitored. But the two late goals were very well taken. Antonio’s chip, Roldan’s header – on the whole fully deserved. Both teams picked their spots to attack and in the end, points are shared.

Michail Antonio makes his presence known for Jamaica. He is a difference maker already, Jamaica said they wouldn’t start until the second half. Once he came on, it was game on. The West Ham man should start up top against the USMNT.

Both teams still stuck at the bottom. There is now clear separation in the CONCACAF table. Panama’s dramatic win in Honduras has them five points clear of both El Salvador and Jamaica. The latter teams face difficult games, El Salvador travel to Panama, Jamaica host the US desperate for points.