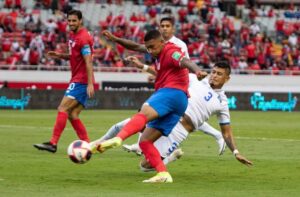 El Salvador: playing for pride, playing the role of spoiler

The 1-1 draw at Jamaica followed a familiar pattern for El Salvador. Despite taking the lead, it was the inability to hold onto it that led to their elimination from qualifying. Eriq Zavaleta returned to the side and headed in the opening goal, before Andre Gray leveled it in the second half. Being unable to hold onto a lead is what undid La Selecta when they traveled to Costa Rica back in October. Jairo Henriquez scored first before two goals in six minutes in the second half gave the Ticos a 2-1 win and a valuable three points.

Hugo Perez has reinforced the message that his team will fight with pride and give it their all. El Salvador have failed to make the most of their home field advantage, winning only once thus far. A second victory can qualify as an upset given the standings and respective team form. El Salvador have not beaten Costa Rica since September 2009.

It’s unlikely starlet Enrico Duenas makes the trip for this one, he missed out against Jamaica. So it’ll be the same set of players tasked to score an unlikely victory.

Here are the match stats from today’s

Costa Rica: looking to stay in 4th, fight off Panama

Very quietly, Costa Rica are enjoying a terrific run of form. Their latest win, the 1-0 upset of Canada has them now at a five-game unbeaten run, with four of those being victories, all by one goal. They haven’t lost since November and are favorites to continue their winning ways in San Salvador. Celso Borges nodded in the lone goal Thursday night at San Jose to stay in fourth place.

If there’s one thing about Luis Suarez’s team, it’s that they don’t give much to the opposition. You’ve got to earn the points against this squad, as they have been involved in constant hard-fought game this qualifying cycle. In fact, they’ve yet to reach double digits in scoring goals (9) and conceding goals (7), but the pragmatic approach has paid off so far. The Ticos need to win to stay in fourth, as Panama are only a point behind and visit the USMNT.

A lot can be decided before the final set of fixtures next Wednesday.