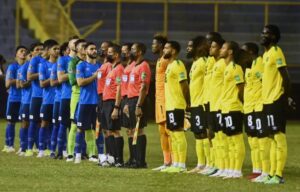 PREVIEW – Ladies and gentlemen, we’ve made it to the final round of CONCACAF World Cup Qualifying. It’s been a wonderful cycle seeing plot twists, surprise results and all the usual madness in between. The first game of this last qualifying cycle is between El Salvador and Jamaica.

One team is looking to finish on a high, while the other is clinging to razor-thin odds of qualification. Their last meeting was a 1-1 draw with both goals in the final ten minutes. Here’s how this game shapes up in Kingston.

La Selecta has a mammoth task if they are to qualify for their first World Cup in 40 years. They need to win out against Jamaica, Costa Rica and Mexico. Currently, in the sixth, they also need both Panama in fourth and Costa Rica in fifth to lose out – you see how difficult that is. It’s rarely, if ever, been done before but that’s what’s facing Hugo Perez and his squad.

Perez has breathed life into this soccer program after it’s fallen on very hard times. They’ve managed to turn fortunes around in this cycle with hard-fought performances and have received praise from neutrals. With a collection of stars in different leagues and newfound talent, they’ve pushed their qualification chances to the final round. However, there’s still much work to do, starting in Jamaica.

First of all, scoring goals have come incredibly difficult for this squad. Of all the teams in the hexagonal, only last-placed Honduras (5) have scored fewer than La Selecta’s six. Their goal differential of negative seven is also another stumbling block given they’ve lost to the likes of Canada twice, Mexico and USMNT.

If there’s one thing to note about the squad list for this round, it’s that there are no surprises whatsoever. This cast of players has been here from the beginning of the cycle, also seeing the emergence of young Enrico Duenas. El Salvador will have to overcome their previous struggles in order to leave Jamaica with a win.

Jamaica: looking to end this cycle on a high

Let’s call it what it is: this World Cup Qualification cycle has been disappointing for the Reggae Boyz. Just one win in eleven games – 2-0 against the last place Honduras team that went through a managerial change. That win was back in October, they’ve lost their last four games including a friendly against Peru.

And given their squad list for this round, it seems as if they’ve thrown in the towel. No, Kemar Lawrence, he hasn’t found much playing time leading up to this. No Cory Burke in attack, meaning Leon Bailey and Andre Gray will have to shoulder the load. Goalkeeper Andre Blake will continue to face shot after shot, for a team that has conceded 16 goals so far – second worst with only Honduras conceding more.

However, the biggest omission is that of Michail Antonio, who scored against El Salvador in the 1-1 draw in November. West Ham fans rejoice but Jamaica will miss his quality upfront in a big way. It’s possible Jamaica leave this game with a point, as they travel to Canada next before finishing up at home to Honduras. It’s all about finishing this round on a positive, and it starts in Kingston against El Salvador.

The post El Salvador goes to Jamaica needing a win and luck appeared first on Last Word On Soccer.