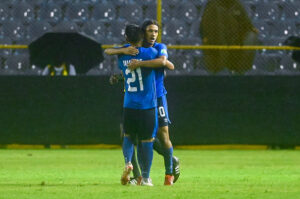 Enrico Duenas is the hero as his first-half strikes give El Salvador its first WCQ win, 1-0 against Panama Thursday night. It’s the first time La Selecta has beaten Panama since June 2008, and they are now level on points on the table.

For El Salvador: the reliable Mario Gonzalez is in goal. Eriq Zavaleta isn’t fit and is not in the eighteen, so Roberto Dominguez and Eduardo Vigil make up the center-back pairing. Captain Alex Roldan and Bryan Tamacas round out the defense at full-back. Marvin Monterroza is in midfield, alongside Darwin Ceren. Enrico Duenas is the surprise inclusion and is on the wing as well as Narciso Orellana. Jairo Henriquez and Joaquin Rivas lead the attack.

Luis Mejia is between the sticks for Panama. Michael Murillo will provide an attacking outlet from defense, Fidel Escobar is at the backline as well. Captain Anibal Godoy is the danger man in midfield, Rolando Blackburn will be another threat at striker.

The rain has impacted the way the two teams play. The ball moves much faster and even slows the ball when it moves across the ground. Rivas had a golden chance to put El Salvador in front. He was denied brilliantly by Mejia.

Enrico Duenas would give El Salvador the lead. After turning the ball over in midfield, Orellana fed Duenas whose initial shot was parried back to Duenas who scored on the follow-up. It would stay at a one-goal game to end the first half.

No surprise, it was the best El Salvador has played this entire WCQ cycle. They’ve outshot Panama eight-to-three, the visitors didn’t record a shot on target. The rain has helped El Salvador in terms of ball movement and pace of play. Panama simply didn’t get into any kind of rhythm in that first half, and will now have to chase the game.

Panama tried their luck from outside but nothing doing. El Salvador made their first subs: Duenas for Marcelo Diaz; Amando Moreno for Ceren.

Panama made their own first subs: Freddy Gondola, Alfredo Stephens and Cesar Yanis enter the match. Quintero, Rodriguez and Ayarza made way.

El Salvador then prepared more changes. Tamacas and Monterroza off for Pablo Punyed and Alexander Larin on. Once again, Rivas with a chance to score a goal but his low effort was saved by Mejia. Gabriel Torres replaced Blackmon in an effort to get an equalizer with 15 minutes remaining.

Enrico Duenas is the hero. The 20-year-old was magnificent from the opening whistle. Taking on players, and being aggressive in possession, he was the team’s biggest threat going forward. He took his goal well despite missing his initial effort, the follow-up was more than enough. Expect to see more starts out of the FC Eindhoven man.

A massive boost for Hugo Perez and La Selecta. Finally off the mark with three huge points. The sting of the defeat at Canada is lessened greatly, as everyone should rightly fear the team up north. But at five points, El Salvador can grow in confidence of getting a result against either Costa Rica or Mexico. They defended their lives and are victorious to show for it.

Panama faces a tricky rest of October. Thomas Christiansen will have his hands full as they are back home Sunday night against the USMNT. Afterwards, is a trip to Canada, two of the absolute best in the region. Panama has shown they can hang with the likes of Mexico, but against the U.S. and Canada, it might be a step too far. These upcoming games will tell us more about where they stand.