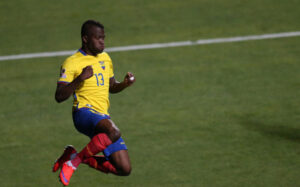 I was 17 when I saw my father cry for the first time.

It was just before 4:30 a.m., on June 3, 2002, and halfway around the world, the country of his birth, Ecuador, was making its World Cup debut in the Japanese city of Sapporo.

Not normally an emotional man, he made no attempt to hide the tears of joy as he sat in front of the television watching the Ecuadorian starting XI sing their national anthem on the international stage.

It didn’t matter to him that they were heavy underdogs in their first match against Italy; they, all 13 million of them, had finally made it.

Months earlier, a Jaime Iván Kaviedes goal against Uruguay was enough to secure a tie in the match and spot to the tournament for the 31st ranked nation in the world at the time.

A total of 40 long years of waiting were set to be erased, and my father had never looked so happy.

For the next 90 minutes, he would not say another word, except for the ones he whispered to himself at the opening whistle.

Never expected to make it past the group stage, it was indeed three games and out. A debut loss against Italy was followed by a loss to Mexico despite leading early. Their tournament ended with joy though, securing a 1-0 win against Croatia.

They secured a repeat appearance in the 2006 edition in Germany by finishing second in South American qualifying, notorious for being one of the hardest confederations to qualify from. Two wins in their first two matches easily secured second-round qualification and were only eliminated courtesy of a trademark David Beckham free-kick for England in the round of 16 match to lose 1-0.

Their 2014 participation in Brazil, would see them repeat their 2002 performance; three games and out.

Almost 20 years on from their World Cup debut, they have a chance to qualify for their fourth time today.

They will play Peru in Lima in a bid to secure three points and another trip to the finals.

Historic wins against Chile and Colombia are highlights from the campaign, helping Ecuador to remain firmly entrenched in the third spot in the table through virtually all the eliminatorias.

That Ecuador Head Coach Gustavo Alfaro’s side can secure a birth with two matchdays to spare thanks to their recent 1-1 tie with Brazil in Quito, represents a massive achievement for the country.

They’ll need to do it away from home and against a rival that is coming off a huge victory and has their own good momentum.

More importantly, they’ll have to do it with the hopes of (now) 18 million people weighing heavy on them.

The Jewel and the angel of goals

The team Alfaro usually selects is heavily reliant on youth like Gonzalo Plata, a player called La Joya or “The Jewel” in Ecuador, with a sprinkling of savvy veterans like globe-trotting captain Enner Valencia and Leon playmaker Angel Mena. The youthful exuberance of Plata and his teammates that took third in the FIFA U-20 World Cup, like Piero Hincapié, Pervis Estupiñán, and Moisés Caicedo, is the motor that makes the team run. These players, all under 24, are getting invaluable experience against top talent in Europe and represent the future of the Ecuadorian national team. The emergence of players like Brighton’s Jeremy Sarmiento and Barcelona’s Diego Almeida gives Alfaro even more weapons to build the team.

If it is not quite a golden generation for Ecuador yet, it is the foundation that could mean they soon start to enjoy one.

A victory against Peru and all that it represents; beating a heated rival and qualification to the World Cup could be just the spark that sets off this golden generation or era of Ecuadorian football. The 2022 World Cup in Qatar will certainly be a good testing ground for gauging how far they’ve come since that first qualification in 2002.

It will also most likely be the moment, scores of Ecuadorian fathers and mothers, daughters and sons, will probably say, “I can die happy now.”

The post Ecuador poised for qualification 20 years after making its World Cup debut appeared first on Last Word On Soccer.