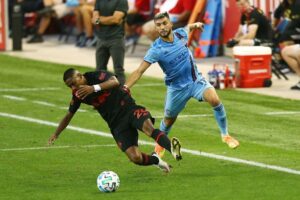 PREVIEW – A month ago, the Red Bulls and NYCFC were set to square off at Red Bull Arena. Then it rained, a lot and the lightning didn’t help either as the game was eventually cancelled and postponed, affectionately known as the Hudson Rain Delay. Now, Wednesday night will see the first of two Hudson River Derby matches, with Saturday seeing the rematch at Yankee Stadium.

Both squads have been in shaky form since the postponement. The Red Bulls have won just once, their latest outing a stunning 4-0 dismantling of Inter Miami on Friday night. NYCFC have won just twice, but both teams will find this week crucial as it comes to their respective playoff pushes. Red Bulls are in eleventh place, nine points back of the Philadelphia Union who hold the final playoff spot. NYCFC are in third place with 38 points, three points behind of Nashville in second, but are also three points in front of Philadelphia in seventh.

The win in Miami felt like a breath of fresh air for Gerhard Struber and his side, playing a 4-2-3-1 and assuming control from the beginning. Omir Fernandez has shined since being inserted into the starting lineup, and Patryk Klimala has scored or assisted in three straight games. That’s also not to mention Fabio heading in two goals. Carlos Coronel recording a seventh clean sheet this year. But now the focus is on Wednesday where Captain Sean Davis knows the importance of this game.

“Now it is all about next Wednesday for us, and we got to take it one game at a time, but those are massive games, not only for our club, our fans, our locker room, and our staff, but also for our playoff push,” said Captain Sean Davis after the match. “So, it is important that we use this momentum in the right way. We use these next few days in the right way, and we are ready to attack New York on Wednesday, especially at home.

“That is the mission, no time for complacency, obviously, we need to have a strong stretch and that is the message to the team right now,” said Davis.

This game will be decided in the final third. According to FotMob – NYFCFC (2nd) and the Red Bulls are top two in Possession Won in the Final 3rd. But that’s where the statistical similarities end there. NYCFC are tied with Supporters Shield leaders New England averaging 1.8 goals per game, and lead the league with nearly six shots on target per game. Valentin Castellanos has scored 12 goals and assisted on seven. Playmaking maestro Maxi Moralez leads the team with eight assists. However, NYCFC also lead the league with five red cards to their name. And in a derby such as this, there will be scuffles.

Keaton Parks has seen his fair share of derbies and came out with a message. “We’re going in to win both games.” As always, more than three points are stake, and this week it’s twice.