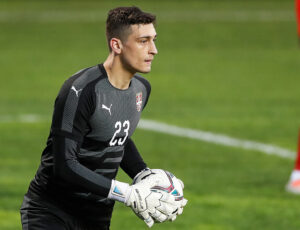 “Regarding any signings, once we have completed a trade or transfer, we will be the first to get that information out. But as of to date, we haven’t finalized any moves” were the words of Bruce Arena prior to the clash with the Red Bulls. This was in response to the talk of a new goalkeeper arriving. Fast forward a week or so now though and Serbian shot-stopper Djordje Petrovic has been announced as the newest arrival in New England.

Djordje Petrovic comes through the door in Boston

Who is Djordje Petrovic?

Djordje Petrovic is a goalkeeper who joins the club from Serbia. He has played for Čukarički for a few years and is a team in the top division, located in the capital Belgrade. Petrovic is just 22 at the moment and so was just a teenager when he burst onto the scene back in 2019.

He graduated from the Čukarički academy and so this move to join the Revs is the first of his career. Standing at 6ft 4 inches, an inch taller than Matt Turner, Petrovic will certainly prove to be an imposing figure. For the club, the youngster 86 appearances in all competitions, keeping an impressive 33 clean sheets.

Djordje Petrovic has a singular national team cap to his name which came in early 2021 friendly with the Dominican Republic, a match that ended 0-0. They may not have been in action that day, but he is in a pool alongside huge names such as Dusan Vlahovic (Juventus), Sergej Milinkovic-Savic (Lazio) and Dusan Tadic (Ajax). If he can excel in New England, the goalkeeper may be able to break into the mix on a regular basis going forward.

Is this the man to replace the outgoing Matt Turner?

Matt Turner is of course the number one at Gillette Stadium but he will be joining Arsenal in the summer. We saw Brad Knighton fill in at the end of last season, but Earl Edwards has been the man of the moment this time around. Acquiring Djordje Petrovic must have been done with the intent of replacing Turner as the number one. He was the best keeper in MLS last season and has been consistent throughout his time in New England.

Turner has been out this season with a mystery injury, the whole situation being pretty chaotic. In the pre-game press conference before the Revolution fell against the Red Bulls, coach Arena said the following on Turner’s status:

It remains to be seen how quickly Petrovic will enter the fold but with Turner soon to be back in action, and a starting spot at the World Cup up for grabs for him, there will be a battle for the gloves.

What does this mean for the Revs’ other goalkeepers?

Obviously, with Djordje Petrovic coming through the door, this puts the place of Brad Knighton and Earl Edwards Junior under pressure. Knighton is down the pecking order despite impressing in the latter stages of 2021. Edwards has more-or-less been solid in the early knockings of this campaign, the third goal against Pumas being the only clear mistake he has made to date.

Turner will be departing come the summer and between now and then, the American duo will have to fight hard for their place in Bruce’s plans. Whoever doesn’t succeed will end up being the third choice and with both having enjoyed a flavour of first-team football very recently, neither will be content with this.

Djordje Petrovic is a fascinating acquisition with this probably answering the questions surrounding the successor to Matt Turner’s throne. It was being pondered whether his replacement would be internal or external. Petrovic looks as if he is the current frontrunner but there is still time for that to change!

The post Djordje Petrovic is the latest Revolution signing- is he Turner’s replacement? appeared first on Last Word On Soccer.