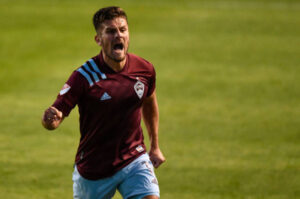 Sam Vines made his first start of the season, having recovered from a hamstring injury. That allowed Kellyn Acosta to move back to the midfield. Colorado passed their way through Vancouver’s high press. The Caps played direct, finding space in behind.

The game started with a good pace as the teams traded chances. Andre Shinyashiki had a few good looks early from just outside the 6-yard box but was unable to finish.

Déiber Caicedo nearly scored on 22 minutes. He intercepted a poor pass by goalkeeper William Yarbrough, cut inside, and shot. Danny Wilson was well-positioned to clear the ball off the line.

Colorado took the lead in the 26th minute. Younes Namli drew a foul just outside the box. Rubio shot directly at goal, pinging the ball off the underside of the crossbar and in.

Colorado had chances in transition with Michael Barrios and Jonathan Lewis getting in behind, but goalkeeper Maxime Crépeau was up to the tasks.

The match looked to turn on a dime with 10 minutes to go. Caio Alexandre went down in the box on a corner with him and Acosta locking arms. Baldomero Toledo initially called a penalty, but after VAR had him review it, it was called off. The match ended 1-0.

Your @MLS Goal of the Week.

Set pieces: Both teams will rue their missed chances on set pieces. Vancouver was regularly dangerous on corners and Colorado as well had chances. The one finish fittingly came on the direct free kick from Rubio.

VAR: VAR got involved on three key plays. Two were second looks on fouls by Cavallini that could have been more than a foul. Then Toledo took a look at the penalty call and reversed it. All three calls were current and a good use of VAR.

Defensive structure: The Rapids looked much better defensively from the run of play in this game. Danny Wilson was great at the back, especially 1-v-1 with Cavallini. The team were much better with Vines playing both ways and Acosta providing stability in the midfield.