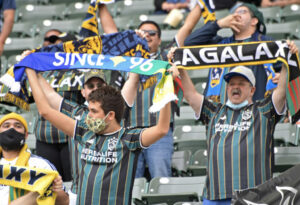 *Defending the badge will be a recurring series dedicated to the Los Angeles Galaxy player that defended the blue, white and gold shield/crest/badge in the most exemplary manner in the previous match.

It was a sight to behold.

All the Los Angeles Galaxy supporters groups were represented. California area codes spanning from Lancaster to San Diego were too. And it would be an injustice not to mention the G’s that traveled from other states like Florida.

The plaudits came in from other Austin fans too, who were as impressed as Turner with how fervently Galaxy fans supported their team despite traveling almost 1,400 miles to watch Los Angeles lose 2-0 to a team bottom of the table.

So, the debut of this new weekly column called Defending the Badge, meant to honor the best Galaxy player from the previous match is dedicated to you, the loyal 400 travelers who made the trip to Austin; the best supporters in the league.

The best support in @MLS pic.twitter.com/wsWf0f7xmg

It was you that defended the badge, crest and city the best.

And even if a Galaxy player had played well enough to earn themselves a space in this column, it would be hard to take it away from the supporters, who defended the colors with their typical rabid zeal for their usual 90+ and earned the respect of the home fans.

It’s not an opinion either.

“I think the fans, the club, of course, deserve more,” Dos Santos admitted. “But I want to tell you that we are working hard. We don’t like to be in this situation. It’s hard. Of course, it’s hard because nobody likes to be in these kinds of situations.”

Spanish midfielder Victor Vázquez took to the gram to ride the apology train with the captain and claimed that although the team “gave everything,” they now needed “everyone” to turn it around.

“We’ve got another final on Wednesday and we need everyone to turn this around.” – Victor Vázquez pic.twitter.com/2YcETWFFAJ

Both players described each of the eight games remaining as a final.

Only seven points separate fourth through tenth place and the Galaxy isn’t exactly inspiring confidence in the fans that they’ll turn it around.

They have their first chance Wednesday away at Real Salt Lake to make amends, however.

With two games in five days, though, including El Trafico on Sunday, Los Angeles might find it difficult to get the fans what they deserve; some wins.

If they don’t, next week’s Defending the Badge will almost certainly be dedicated to the Los Angeles Galaxy supporters again.

The post Defending the Badge: The loyal 400 ride to Austin appeared first on Last Word On Soccer.