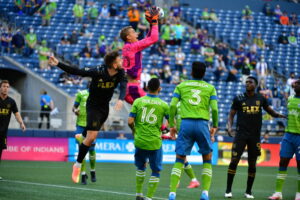 Xavier Arreaga has had a whirlwind career in MLS so far. He joined the Seattle Sounders in 2019, looking to be the next big center back for the Sounders. He had a great mentor to learn from in Chad Marshall, the veteran and two-time MLS Defender of the Year.

However, Arreaga never found consistency — until this year.

He’s found his place in the Sounders new formation, which includes a three-man center back pairing on a five-man backline. He’s formed a strong partnership with Yeimar Gomez Andrade and Shane O’Neill, who is having a resurgence as well. Arreaga is getting consistent minutes and showing the Sounders faithful why he once came on a Designated Player contract. On Sunday night, in a 2-0 victory against LAFC, Arreaga scored his first MLS and Sounders goal.

Arreaga wasn’t the only defender to score on Sunday night. Brad Smith scored his third goal of the MLS season, sending in a cross from Alex Roldan into the net. Smith scored against LAFC when the two sides met a few weeks ago.

Smith made up from the first half, where he had a open shot inside the box that went wide.

The match also featured the return of Carlos Vela from injury, as he subbed into the contest in the 70th minute. Vela entered the match for José Cifuentes.

In goal for the Sounders, a different “Stefan” took his place between the sticks. Against the San Jose Earthquakes, the Sounders lost both Jordy Delem and Stefan Frei to injury. Delem took the worst of it, tearing his ACL. Meanwhile, Frei is out for two months with a knee sprain.

In net, Stefan Cleveland earned his first MLS start and clean sheet, facing shots from Mark-Anthony Kaye, Diego Rossi and LAFC’s strong attackers. Cleveland put in a strong performance and made his case to continue starting while Frei recovers.

What’s next for the Seattle Sounders and LAFC?

The Sounders will remain at home and prepare to take on Atlanta United, who welcomed more than 41,000 fans in the Mercedes-Benz Stadium on Saturday night. Seattle and Atlanta will face off on Sunday, May 23, at 4:30 PM ET.

Meanwhile, LAFC will look to recover against the Colorado Rapids on Saturday, May 22, back at home at 10:30 PM ET.

What. A. Play. @bradsmith_94 scores his third goal of the season!