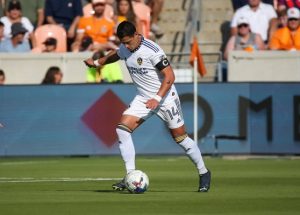 EDITORIAL – The MLS regular season concluded on Sunday with Decision Day 2022. The top four seeds in the Western Conference were mostly settled, but there were things to play for. LAFC had the Supporters’ Shield in hand, but were playing a Nashville SC team looking to get a home playoff game. FC Dallas and Austin had effectively dead rubber home games, though Sebastian Driussi wanted to pad his stats for the MVP race. LA Galaxy were at Houston Dynamo looking to get that last home playoff spot over Nashville.

The first half was all Los Angeles. They outshot the visitors 15-5. Dénis Bouanga started in the front three over Gareth Bale and they swarmed Nashville. He and Carlos Vela had several chances. The dam looked like it was finally going to break at the end of the half when Daniel Lovitz fouled Cristian Arango in the box. Arango took the penalty, but goalkeeper Joe Willis made a fingertip save on the panenka. Fittingly, Teal Bunbury scored in the 53rd off a corner to open the scoring. LAFC huffed and puffed with numerous chances but couldn’t score.

DON’T TRY THAT ON @JoeWillis23

Poor officiating marred this match. Driussi appeared to open the scoring in the 25th minute on a set piece but VAR ruled the No. 10 was offside. Austin won a penalty with 10 minutes to go as Acosta took down Felipe Martins in the box off a poor turnover against the press. Driussi buried it. Diego Fagundez put the ball in the net moments later but was ruled offside. He appeared to be onside based on the replay. Lalas Abubakar should have been sent off for DOGSO in the final minutes for running into Driussi on a long ball. Moments later, Diego Rubio scored on a corner to tie the club single season goal record.

Cool as you like from the spot from @SebadriussiOk!

Another game with little to play for. Dallas had an unlikely path to drop from third to fourth. SKC were already eliminated from the playoffs. Paul Arriola appeared to open the scoring early, but VAR ruled him offside on the pass from Sebastian Lletget. Da Boy would open his FCD account a half hour in on a deflected shot. Graham Zusi equalized early in the second half on a rebound off a corner. Dallas responded in the 65th. Arriola scored a tap in set up by Alan Velasco. FCD held on to secure the three seed.

Velasco with the nutmeg, and Arriola with the finish. *Chef’s Kiss* pic.twitter.com/NkiFE468T4

This was the most exciting of the games. Houston scored early on a Sebastián Ferreira header with the Galaxy defense disorganized. The visitors responded with two goals in two minutes. Riqui Puig scored with a late run into the box set up by Samuel Grandsir. Then Chicharito Hernandez made a great run in behind and beat Steve Clark 1-v-1 on a first time shot. Dejan Joveljić added an insurance goal in the 69th minute on a great through ball by Efraín Álvarez. Galaxy held out to win, securing the four seed.

Last Word: What it means for seeds 1-4

LAFC already had the top seed secured. This game was an exercise. That said, it might be a bad omen. They played a team who let them have the ball and played defensive. They had a bunch of chances and could not finish, recording 4.5 expected goals. The pressure and expectations will be on them for every game in the playoffs, no matter the opponent. Maybe they got their bad finishing out of their system. Hard to imagine them in the playoffs wining the xG 4.5-1.2 and losing. If nothing else, Arango will be working on his penalties this week.

Austin, like LAFC, came into Decision Day with their table place decided. They played very well in this game. The referees were abhorrent. They had a good goal called offsides. There was another 50/50 offsides call on Driussi that went against them. Driussi should have drawn a red on Abubakar. Josh Wolff shouldn’t be mad with the team dropping points at the death. Austin will be a contender. The biggest playoff implications from this game is Pierre-Luc Lauziere and his VAR Alejandro Mariscal should not be getting postseason assignments.

Dallas looked good against an SKC team that came to play free and without pressure. They were dangerous in transition. Jesús Ferreira looked good despite not scoring. They’ll be confident in the first round. I do wonder how they’ll fair once they play a team that’s organized defensively against their counter attacks, like Austin or LAFC.

LA Galaxy have played Houston on Decision Day for several years now. It usually has gone poorly. The start was bad. But the response was great. Hernandez, Puig, the midfield, and Joveljić all were dangerous. If everyone’s clicking offensively, they can compete. This defense is still a key weakness. It’s hard to see them going far as a result.