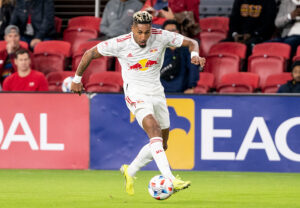 Decision Day has come and gone, and the Red Bulls have clinched a playoff spot. Fábio scored inside 38 seconds before Hany Muhktar equalized with a sublime free-kick. Carlos Coronel made a number of fine saves as Nashville was looking for all three points.

It was nervy and tight throughout, but the 1-1 draw was just enough as New York makes the postseason. A twelfth straight trip to the playoffs, an impressive streak, but this one more so as the league’s youngest team. They enter as the seven-seed, here’s what it means this time around.

Familiar foes collide in the first round of the Eastern Conference playoffs. The Red Bulls and Union have squared off three times this season and have drawn twice 1-1, Philadelphia won the early meeting 1-0. They’ve also met in the playoffs only once back in 2019 when the Union completed an astonishing comeback to win 4-3 in extra time.

Both teams mirror each other in terms of playstyle and philosophy. The Red Bulls have gone through an incredible surge over the fall to clinch the last playoff spot. No Patryk Klimala, but the Brazilian Fábio justified his selection with his early goal. The 33 goals conceded by New York is amongst the fewest in the league, the mentality shift was activated to bring more steel in their play. It’s not been easy bringing in so many signings, without a preseason and getting great performances from key figures.

Philadelphia will be confident in their own right. Another 50+ point season for Jim Curtain and company, they’ve been brilliant from the start. They hold the second-best home record in all of MLS and are sure to have a packed crowd for this rivalry game.

Gerhard Struber’s men should be confident on the road

Ever since the lost summer, the Red Bulls went 7W-1L-4D to surprise everyone on their way to the postseason. Controlling their playoff destiny from September onwards, nobody could’ve seen this coming. Now is the fun part, the playoffs and heading onto the road.

New York came away this year with the fifth-best away record in the East. It took time to earn that distinction, and now with time until the playoff game, health will play a big role. Aaron Long suffered his season-ending injury in Philadelphia earlier this year, but key signings Andres Reyes and Tom Edwards have filled the void. Patryk Klimala will feature against Philadelphia alongside Fábio, barring something unforeseen.

One bright spot this season has been the play of Omir Fernandez. The Mexican winger chipped in with three goals, including the winner at NYCFC in Yankee Stadium back in September. The only true winger at the club, he brings so much to the table tactically and is a spark offensively. Having come off the bench against Nashville, he will be huge having just come off a hamstring strain.

It’s easy to scoff at this team when people say they’re not “far off” from contending, but the leaf has turned. Clean sheets and key goals have made the Red Bulls a hard team to play against with their play style. The defense has been their calling card, and will no doubt give the Union a few scares. Confidence should be high when New York takes on Philadelphia for the last time in 2021.

The post Decision Day: Red Bulls should be confident after clinching playoff spot appeared first on Last Word On Soccer.