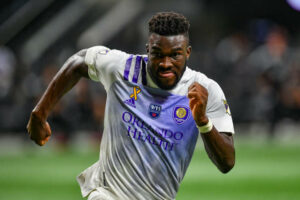 ORLANDO – Orlando City SC hosted D.C. United on Saturday night at Exploria Stadium. The teams were headed in opposite directions in the MLS Eastern Conference table. United had won four of their last six games and were looking to make a run to playoff contention. The home side had drawn midweek against Nashville SC. Prior to that, they’d lost four in a row. In the end, Daryl Dike would make sure that narrative changed.

D.C. United wasted no time establishing themselves. Just six minutes in, Julian Gressel scored. United played direct up the middle, getting the ball to Gressel on the edge of the box. He unleashed a laser of a shot past goalkeeper Pedro Gallese.

The Lions responded 11 minutes later. Júnior Urso got a header off a corner on goal. Bill Hamid made the save but left the rebound. Robin Jansson was there to bury it into the top of the net.

Orlando controlled the game for stretches later in the half and into the second half. Both teams traded half chances before the final minutes.

Tesho Akindele had a shot cleared off the line in the 88th minute. He and Daryl Dike stumbled forward in transition. Dike found Akindele for a shot to the side of the box. Hamid made the save, but the ball deflected up in the air and was still heading for goal. Joseph Mora cleared the ball off like.

In the final minute of stoppage time, Orlando won a corner. Dike made a run to the near post. He headed the ball across goal, off the crossbar, and over the line. The match ended 2-1 to the home side.

United go pragmatic: D.C. didn’t go for it in the second half which was a bit surprising, but understandable. They’d been on a great run of form, yet Losada seemed content in playing conservative and going for the draw. It ultimately cost them.

An exciting six pointer: This was another exciting game in a logjammed Eastern Conference playoff race. It was the first victory for OCSC in almost a month and was much needed.

Dike’s on fire, your defense is terrified: Daryl Dike has three goals in his last three games. He had that many going into that stretch (three goals in nine appearances). He’s rounding into form just in time for club and country.