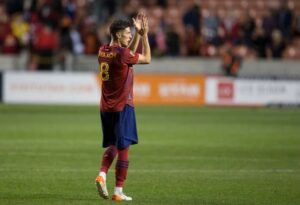 SANDY, UTAH – Real Salt Lake and Damir Kreilach hosted Colorado Rapids on Saturday night in the third and final leg of the 2021 Rocky Mountain Cup. Anything but a win by the Rapids and RSL would retake the trophy, having lost it last season.

RSL opened the scoring in the 13th minute. Pinging the ball around in the final third, Aaron Herrera whipped a ball into the box. Albert Rusnák got a touch on it with his head to put the ball at the back post. Damir Kreilach smashed the ball over the line with his head. It was his fifth goal in as many games.

The match got physical after that. There were several tactical fouls on Cole Bassett, the worst by Kreilach after kickoff after the goal. No card were given. Collen Warner got the first caution on 22 minutes, trying to break up a counter attack with Everton Luis on the ball. Captain Jack Price got the only other yellow of the half.

The home side picked up where they left off in the second half. After chances for Andrew Brody and Pablo Ruiz, they got their second goal. Kreilach held off Warner at the edge of the box and passed to Rubio Rubin who timed his run perfectly. The striker shot first time, picking out the bottom corner.

Colorado made it 2-1 in the 73rd minute after several dangerous attacking moments that included two hit posts. Off a corner Younes Namli volleyed the ball. It went off Kreilach and past Ochoa. Ochoa had a scare earlier in the half when he got flipped in the air going up for a cross by Diego Rubio, landing on his head. He stayed in the game.

The match ended 3-1. In the final minute of stoppage time, Anderson Julio split the center backs and scored on the break away. RSL clinched the Rocky Mountain Cup by a score (point total) of 6-3.

No. 14 for King Kreilach

Damir Krielach scoring streak: This was Kreilach’s fifth goal in five games. His goal and assist led to the win. Aaron Herrera also had an excellent game, playing slightly out of position in a back three.

Namli back on the score sheet: The one bright individual performance for Colorado was Namli getting his first goal since his injury and the first of the season.