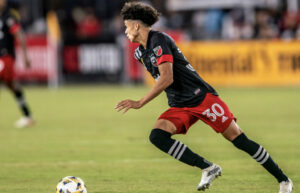 Kevin Paredes’ 9th minute goal stood up as the winner in a tight D.C. United 1-0 win over the New York Red Bulls. The result pushes D.C. over the playoff line in seventh, leaving out the Red Bulls for the time being.

D.C. United make just two changes to the team that was humbled 6-0 at NYCFC. Paul Arriola is back leading the line alongside Ola Kamara and Nigel Robertha. The midfield stays the same with Canouse-Moreno-Paredes. The other change sees the Honduran Andy Najar back at left-back over Tony Alfaro and Joseph Mora.

New York rolls out the same lineup that pulled out the dramatic 2-1 victory over the Columbus Crew. John Tolkin joined Omir Fernandez and Aaron Long as the only players to miss this match.

D.C. United take the lead inside the opening nine minutes. Robertha picked up the ball inside the box and squared it onto the path of Paredes who calmly finished it. Red Bulls back line was caught napping. Only the third goal of the year for the 18-year old American.

Fabio nearly equalized but his header to the back post went wide of the mark. The Red Bulls inched closer from a Edwards free kick that was tipped over the bar.

Junior Moreno earns the games’ first yellow card bringing down Casseres. Paredes couldn’t continue after picking up a knock and would be replaced by Joseph Mora.

Hamid keeps United in it as he gets low to kick-save a Fabio shot before saving the rebound by Casseres. The first half concluded with D.C. United holding a slim one-goal lead. New York piled the pressure on over the last 15 minutes of the first half, only for Hamid to deny them. D.C.’s has been made to work making four saves. Only one shot on target — the Paredes goal — for the home side.

Second Half: D.C. United hold on to defeat the Red Bulls

Drew Skundrich replaced Arriola to start the second half. D.C. nearly doubled the lead off a snap header by Gressel but was stopped cold by Coronel.

The Red Bulls had a golden chance to pull level but Klimala rolled his shot wide of goal. Wikelman Carmona entered the match for Fabio. Hamid saved the ensuing rip by Gutman at the near post.

Andy Najar was subbed off for Chris Odoi-Atsem. Lucas Monzon made his MLS debut coming on for Andres Reyes. Danny Royer came on for Klimala and Youba Diarra on for Yearwood.

Bill Hamid keeps D.C. United alive. In one of his best performances of the season, Hamid kept the Red Bulls out of goal. With five saves on the night, he put forth a proper Man of the Match performance. Now in seventh place, the work is not done but they’ll definitely feel better winning the Atlantic Cup.

The Red Bulls unbeaten run ends with a whimper. It was always bound to end but this was a disappointing game throughout. There was no cohesion from the midfield to the attackers, many players had a subpar performance. Fabio was frustrating, a lot of players were alone at sea, the tactical tweaks weren’t enough. Eventually it all results in a sluggish effort and zero goals, zero points to show for it.

Six-pointers await both teams until the end. D.C. United hosts Columbus and travels to Toronto to finish. The Red Bulls will host Montreal, Atlanta and finish at Nashville. So, who’s your money on? Who makes the playoffs? It’s going to be nail-biting to the end.