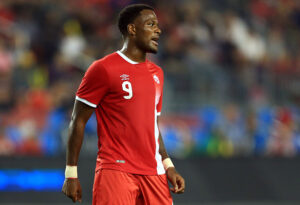 Cyle Larin and Alphonso Davies both played a big role in Canada’s 5-1 win over Bermuda. Canada dominated the game from beginning to end and generated most of the chances in the game. Bermuda really did not generate much offence against Canada. They had only two shots on goal compared to Canada’s 14 shots on target.

Alphonso Davies and Cyle Larin were standouts for Team Canada

Both Alphonso Davies and Cyle Larin played a big role in Canada getting a huge win over Bermuda. The first goal came from Davies’ free-kick. Larin’s header from that free-kick resulted in Canada taking the early 1-0 lead in the 19th minute.

The second goal was a good one from Larin. He got an excellent pass from Davies. Larin had the foresight to get past the Bermuda defender to get the shot off. He did that and scored his second goal of the game. In the third goal, Davies made a terrific pass to Cyle Larin, who put the ball in the back of the net. This goal marks the first time Larin has scored a hat-trick for the Canadian men’s national team.

This made up for the earlier chance when Cyle Larin failed to score in the 33rd minute. He was too unselfish to shoot the ball and instead of shooting the ball, had his pass intercepted by a Bermudan defender. This is while Davies was making himself a nuisance for the Bermudans all day long. He also had some chances to score, but his shots were stopped by Bermudan goalkeeper Dale Eve.

Canada had plenty of chances to score

Canada had 26 shots with 14 of them on target. This is much more than Bermuda’s four shots including two on target.  This statistic tells the story of how the game went. There were a lot of chances for Canada to score. This included in the 16th minute, where Lucas Cavallini’s shot was stopped by Eve. Cavallini would then get another chance to score in the 35th minute via a Davies pass but was unable to score. Cavallini had several chances to score but was unable to get one in the back of the net.

However, because of the number of chances Canada created, they would inevitably score more goals. Current Toronto FC player Richie Laryea scored his first-ever goal for the Canadian men’s national team. He was all alone with Bermuda goalkeeper Eve and his shot went into the back of the net.

53′ Congrats to Richie Laryea, who scored his first-ever goal for #CANMNT against #BermudaFA. #CANvBER | 3-0 | #WCQ pic.twitter.com/v5HjemSuLy

Laryea was not the only player to score his first-ever goal for the Canadian men’s national team. In the 81st minute of play, Liam Millar makes a good pass to Theo Corbeanu. Corbeanu then shot the ball into the back of the net in his first-ever game for the senior team.

Bermuda only had 26.6 percent of the possession, which was reflected on the scoreboard. Their first shot on target was in the 7th minute of play, where Calon Minors shot was stopped by Canadian goalkeeper Milan Borjan. They would only get one more shot on goal. This time, however, they would score a goal.

63′ #CANMNT goalkeeper Milan Borjan would want this one back. He fumbles the ball and #BermudaFA‘s Kane Crichlow capitalizes and scores their first goal in the game. #CANvBER | 3-1 | #WCQ pic.twitter.com/LEjIpQYvIQ

Kane Crichlow took advantage of Canadian goalkeeper Borjan’s mishandling of the ball. However, this would be Bermuda’s last shot on target in the game. Cecoy Robinson had a chance in the 68th minute of play to score, but his shot missed the target.

Canada dominated in shots, possession, and passing accuracy. In fact, Canada had a 90 percent passing accuracy compared to Bermuda’s 72 percent in the game. This was an expected win for Canada as they were heavy favourites to win Group B. However, it cannot be underestimated that this win is vital for Canada to progress forward to the second round. Bermuda is one of two teams that Canada should take notice of in the first round of World Cup qualifying. The other is Suriname, which they will play on June 8.

The partnership between Cyle Larin and Alphonso Davies was exceptional today.

The Canadians will continue their World Cup qualifying campaign against the Cayman Islands on March 28. The time of the game will be at 4:00 PM ET and the game will take place at IMG Academy at Bradenton, Florida. It will be shown on OneSoccer. They will then not have another game until June 5 when they face Aruba.

March 28 promises to be a big day for Canadian soccer. At 9:00 p.m. ET the Canada U-23s will face the Mexico U-23s in the Concacaf Olympic Qualifying semi-finals, which will also be shown on OneSoccer. The game will take place at Estadio Jalisco in Guadalajara, Mexico. The winner of the game qualifies for the 2020 Summer Olympics, something Canada has not done since 1984.