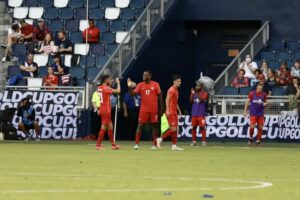 KANSAS CITY- As the crowd slowly began to fill in for the United States Men’s National Team who were set to play later, Haiti scored to get back into the match. It was 2-1 and all of a sudden Canada started to look vulnerable. But two penalties and a red card later, Canada had put themselves out of reach and into the knockout phase.

Cyle Larin brace sends Canada through to the Knockout Round

Before Cyle Larin got started, Stephen Eustáquio started the match with a moment of brilliance. His free-kick made it 1-0.

Haiti threatened multiple times through the end of the second half and looked like the most likely to score next. But in the second half, Cyle Larin showed up in a big way. Larin started by slamming home a rebound, and he was influential in earning the first penalty kick, in which he deposited to make it 3-1. Ayo Akinola came on and was dragged down inside the area on a breakaway, in which a straight red card was given. Junior Hoilett scored to make it 4-1, and that scoreline stood until the final whistle.