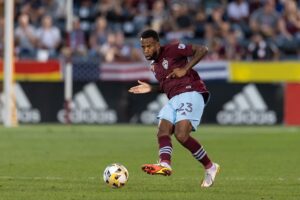 The first half started with good energy. Colorado played through Jonathan Lewis and Kellyn Acosta on the left flank. Seattle played out of the back, aiming to get balls into the box for Freddy Montero. Both sides had some decent half chances in the opening minutes.

Colorado’s best period came 10 minutes in. Andre Shinyashiki found Dom Badji on the run who fired the ball at goal. Stefan Frei palmed the shot, which would not have been on goal, away.

Montero appeared to open the scoring 20 minutes in, winning the ball from goalkeeper William Yarbrough and chipping it into the side netting, but he was called for a foul in the process.

The best chance of the half came in the 34th minute. João Paulo crossed the ball to Montero who had space right in front of goal, but he headed the ball over the bar.

Paulo was denied in the 55th minute after dribbling through multiple defenders to get inside the box. The play was similar to his goal the last time these two teams played.

Colorado finally looked dangerous on a restart, scoring in the 66th minute. Price sent the ball to the near post. Dominique Badji got higher than anyone around him, flicking it across goal and in.

Seattle equalized in transition in the 81st minute. Cristian Roldan made a long run from midfield, splitting the center backs to sneak the ball past Yarbrough. Léo Chú provided the service.

The match ended 1-1 with the best chance coming on a direct free kick by Nicolas Mezquida that he shot over the bar.

They love their set pieces in Colorado.

Badji comes home: Badjo scored his second goal since returning to the Rapids and his first at home.

Cristian Roldan equalizer lifts Seattle: Colorado looked energized from scoring first and looked poised for another. Seattle were dangerous in transition all night. Roldan’s run and finish finally got them on the board.

No playoffs yet for Colorado: The Rapids could have clinched a playoff spot outright with a win. They’ll have to wait until at least Saturday to do it now. A win against Portland Timbers and they are in.