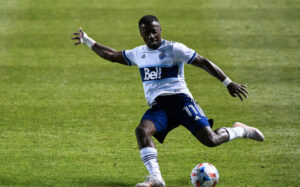 The Vancouver Whitecaps welcomed Canadian Rivals CF Montreal to Sandy, Utah, last night, in their second and final match against Eastern Conference opposition. With both teams starting fairly strong out of their respective gates, Montreal had looked the better of the two sides. The Whitecaps had struggled in the open play, while Wilfred Nancy’s side were undefeated through three games. Given both team’s style of counter attacking play, a cagey, slow match was expected.

This was the case for the first 45 minutes.

Vancouver had reverted back to it’s typical 4-4-2, with the pairing of Lucas Cavallini and Cristian Dajome up front. They typically shifted to a front three as well, featuring winger Deiber Caicedo on the right flank. While these three caused some problems for Montreal, it was never anything too threatening.

In fact, Montreal were the aggressor. A handful of shaky moments from Jake Nerwinski (who’s job is on thin ice right now with Bruno Gaspar watching from the bench), were bailed out by an ever-reliable Maxime Crepeau.

Given that Vancouver is still yet to score from open play in 2021, it seemed inevitable that the streak would somehow continue in this one. Given the Whitecaps’ hesitation to move forward with numbers, a daunting high press from Montreal nipped many attacks in the bud. So when the Dajome-Cavallini-Caicedo trio broke forward in the 56th minute, no one thought anything of it. However, Kamal Millar sending Dajome crashing to the floor inside the box gifted Vancouver a golden chance to take the lead from 12 yards out.

The Colombian converted his second spot kick of the year, and Vancouver found themselves with a rather undeserved lead.

Typically in 2021, Vancouver seems to lose any control of the game around this 65th minute mark, so to see their performance improve as the second half went on was a pleasant surprise. Nancy made a wave of subs, using all five spots before Marc Dos Santos brought on one.

Yet, the fresh legs seemingly didn’t impact the game as much as Vancouver’s new Colombian duo. Because in the 71st minute, Caicedo whipped in a corner for none other than Dajome to head home his third on the year and doubled Vancouver’s lead.

Lassi Lappalainen had his 89th minute tally called back by an outstretched Erik Hurtado arm, still helping out his old team. The match ended 2-0 Vancouver behind a pair of dead ball goals from Christian Dajome.

Last Words on Vancouver vs. Montreal

It was far from a pretty performance from Vancouver, as fans are starting to get a picture of the team’s style and tactics this campaign. Still no goals from open play is concerning for Vancouver, especially seeing the chances that they’ve wasted in front of goal. The pieces are slowly starting to fall into place for Marc Dos Santos, who told people in his post game press conference to be patient with his offense.

Vancouver now look ahead to a struggling Minnesota United side this Wednesday, hoping to make it two wins in a row for the first time this season.