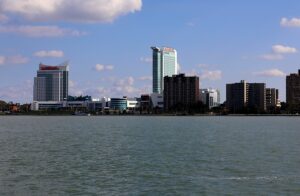 ANALYSIS – CPL grants Windsor a tentative CPL franchise. The one known person that will be involved with the Windsor is now former CPL commissioner David Clanachan. Clanachan stepping down means a new commissioner needs to be hired into the CPL.

News: Commissioner David Clanachan has been awarded the exclusive rights for a #CanPL expansion club in Windsor/Essex County.

As a result, David will step down as the League’s first Commissioner to focus on bringing a professional soccer club to his hometown.

CPL grants Windsor a tentative CPL team today. The Windsor Census Metropolitan Area has an approximate population of 344,747 according to Statistics Canada. However, when looking at Detroit, which is across the river from Windsor, the population increases significantly. The Detroit-Warren-Dearborn metro area has a population of 4,304,136 according to Statista. This is worth noting, especially when Detroit does not have an MLS team right now. They do, however, have a USL Championship team called Detroit City FC. The team was founded in 2012.

This is what Clanachan said about the possible CPL franchise in Windsor, Ontario according to Andi Petrillo of OneSoccer:

This is the timeline that Clanachan gave when interviewed by Kristian Jack of CPL Soccer:

“I think 2024 is probably as is an ambitious target. Would love to have a team playing down there prior to the World Cup in 2026 when it comes to North America.”

David Clanachan had a very successful four-year run as CPL commissioner. He then was able to get the league to play a season two years in a row during a pandemic. This is very commendable as other notable leagues with much more history like the CFL and the NLL were unable to achieve.

@ForgeFCHamilton become the first #CanPL club to be crowned Champions

Also, the fact that Forge FC made this year’s Concacaf Champions League is also a big accomplishment. Other accomplishments included getting Atletico Madrid on board, which resulted in Ottawa getting a CPL team. Also, there were two other cities (Saskatoon and Vancouver) granted a tentative CPL franchise under his leadership.

In an interview with Luke Wileman of TSN Soccer, this is what Clanachan said about the one regret he has as commissioner:

“The only thing I am disappointed in is, and I think it will happen sooner rather than later, but not having a team in Quebec, that to me is the one thing left undone.”

Other things left unfinished include the negotiations with the Professional Footballers Association Canada and finding a new ownership group for FC Edmonton. However, the talks with the Canadian Premier League and the Professional Footballers Association Canada started last month according to CMAW. As for FC Edmonton, they are currently owned by the Canadian Premier League.

However, Thomas Nef, co-host of Northern Futbol, tweeted that he heard about this three months ago. This means that the search for a new Canadian Premier League may have already started.

Sports Teams in Windsor and Detroit

Clanachan said this about wanting to have a team in Windsor according to OneSoccer:

“Yeah, so as most people know, I come from Southwestern Ontario. I literally immigrated to Windsor from Scotland as a youngster and spent my entire education and life down there so Windsor/Essex County played the game of football down there for quite some time.”

Windsor only has one professional sports team. This is NBL of Canada’s Windsor Express, which plays at the WFCU Centre. They also have an OHL junior hockey team called the Windsor Spitfires. However, both teams play in the winter period, so this tentative CPL team would be the only pro sports team in the summer.

As for Detroit, they have an NHL, MLB, NFL, and an NBA team. They are one of only 13 US cities to have all four pro sports teams. Unlike Windsor, it is a crowded sports market. However, there is room to get a first-tier soccer team for people living in Detroit. Other cities with large populations like Philadelphia and Minneapolis-Saint Paul for example support all four major sports and an MLS team.

It is important to note that Windsor needs to get a soccer-specific stadium in order to get a CPL team. There is no guarantee as the Windsor Express was denied permission to revitalize Windsor Arena last year according to Sanjay Maru of CBC News. The Express is hoping to move from the WFCU Centre and play at Windsor Arena. Windsor Arena was the first-ever home arena of the Detroit Red Wings. However, at least things are moving forward. Getting exclusive rights to a CPL team is one step in the right direction.