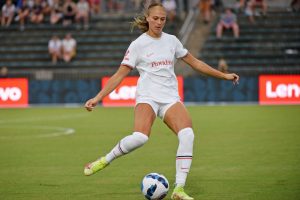 CARY, NC – Coming off a huge 4-0 win against Chicago Red Stars last week, North Carolina looked to keep that momentum going at WakeMed Soccer Park. They did that and more when the Courage upset first place Portland Thorns at home in Cary, North Carolina. Before Wednesday night, the Thorns were on an 11-match unbeaten run in NWSL. However, this would be their third game in eight days after losing to both Monterrey and Chelsea during the in-season Women’s International Champions Cup.

North Carolina opened the scoring in the 24-minute. Carson Pickett was able to put in a perfect cross which was headed in by Diana Rosario Ordonez. For Ordonez, this was a team-leading tenth goal of the season and tied the NWSL goal streak record with nine goals in six matches. Ordonez was subbed off in the 33-minute after taking a knock but was able to leave the pitch under her own power.

Just @diana0rdonez scoring goals. As she does

Things continued to go North Carolina’s way at the start of the second half. In the 50-minute, a cross in the box was able to find its way through several players to reach the feet of Debinha. The Brazilian international was able to slot home her fourth goal of the season to make it 2-0.

Fifth of the season for @Debinha7 and it’s a beaut

Later on, in the 63-minute, Portland found a way to get back into the match. A corner kick from Yazmeen Ryan of the Thorns found the head of Rocky Rodriguez. With a goal, Portland made it 2-1 with 27 minutes left in regulation.

Any hope of a comeback was dashed in the 83-minute. After earning a corner, a headed assist from North Carolina’s Jaelene Daniels got to Meredith Speck. Speck found the back of the net from her own head and secured a 3-1 victory for the Courage.

.@meredithspeck25 makes it three for the Courage

Where the two teams are placed now in the NWSL

Congratulations @kellihubly on another career milestone!

On Kelli Hubly’s 50th NWSL game, the Courage found a way to upset the Portland Thorns. Less than a week ago, North Carolina was at the bottom of the table with just 10 points. After two quick wins on Saturday (4-0 win over the Chicago Red Stars) and Wednesday, they have moved up three spots to ninth.

The Courage is now seven points back from a playoff spot with games in hand. A big part of that was the Courage upset first place Portland Thorns. For Portland, They are still tied for first with San Diego and Houston on 28 points. But they have a comfortable 10-goal difference lead and are favorites to win the shield.

North Carolina will travel to Kansas City to face the Kansas City Current on Sunday, August. 28 at 7:00 p.m. ET. This is while Portland will host the expansion-side, the San Diego Wave, on Saturday at 10:30 p.m. ET.