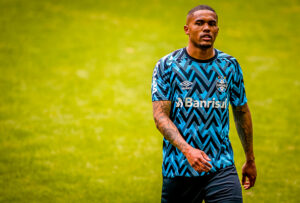 Costa’s signing ends weeks of speculation about when or whether the five-time MLS Cup Champions would land their “game-changer.”

Costa signs with Galaxy: The “Flash” come to Los Angeles

@douglascosta is ready for @MLS

Initially joining the Galaxy on a six-month loan from the Brazilian side Grêmio before signing a one-and-a-half-year contract through the end of the 2023 MLS regular season, Costa will become Los Angeles’ third and final DP when his permanent move is completed. He’ll occupy an international roster slot and should be available for the Galaxy upon receipt of his International Transfer Certificate (ITC) and P1 Visa. With a turnaround time of about seven days, the Galaxy hopes Costa’s P1 Visa clears in time to have him see some action in this coming weekend’s pre-season match against the New York Red Bulls.

The Brazilian National team player was presented to the world on Thursday afternoon, all smiles, while flanked by Los Angeles Galaxy Technical Director Jovan Kirovski and Galaxy Head Coach Greg Vanney. Gifting him the number 10 shirt once worn by Landon Donovan and Mauricio Cienfuegos, Kirovski and Vanney gushed about Costa’s track record of winning wherever he has gone.

Costa spoke of the challenge of returning the Galaxy to the top and his desire to have his name alongside Galaxy greats like Zlatan Ibrahimović and David Beckham. He repeated more than once how motivated and happy he is for that challenge.

Both Kirovski and Vanney spoke of the many titles that Costa has won with some of the biggest teams in the world; teams that include Shakhtar Donetsk, Bayern Munich, and Juventus. Each is arguably the biggest club in their respective league, making the bright lights of L.A. just one more big stage that Costa will perform on.

“Douglas is an exceptional talent who has played at some of the biggest clubs in the world,” LA Galaxy Technical Director Jovan Kirovski stated. “He is a big addition to our team, and we believe he will be a difference-maker in MLS.”

Since debuting with Shakhtar in 2008, the 31-year-old has made over 400 professional appearances, won 21 trophies in the top leagues of Brazil, Germany, Italy and Ukraine, and has been a pivotal part of various UEFA Champions League sides. Costa’s six goals and seven assists in the 2010-11 edition of the tournament, helped Shakhtar Donetsk reach the quarterfinals that year.

His performances in Europe earned him his first call-up to “Seleção“ in 2014 and was named to his country’s 2018 FIFA World Cup squad, making two appearances with an assist to his name.

But despite Costa’s proven track record at the world’s biggest clubs and obvious individual quality, some G’s will never be happy and are skeptical of the move. There are fears that Costa is another big name with his best years behind him, critics point to his many loans over the last few years and his recent low output due to injury at Grêmio last season. Detractors of the move also worry about signing Costa, a winger usually, over players who can plug the perceived gaps at attacking midfield and defense in the roster. But after a protracted deal that Vanney confirmed took about six weeks, Costa will be eager to show his “flash” to the league.

Costa’s “flash,” experience and skill means he’ll be expected to be the “game-changer” that Vanney so clearly coveted. Costa could also be the Galaxy’s most talented player upon his insertion into the lineup. His combination of speed and technical ability will draw defenders to him and stretch opposing defenses, opening up space for attack partners like Chicharito and Kevin Cabral to flourish. He is exactly the kind of wing weapon the Galaxy was missing last year as they searched for a viable second offensive option during Chicharito’s lengthy injury and down the stretch.

“Douglas is a world-class player and a proven champion at the highest level. His capacity to create and finish will add yet another level to our attack,” Vanney said. “We are excited to integrate him into the team as we push toward the start of the season.”

Also, if Costa is indeed successful in bringing the Galaxy “back,” he’ll soon achieve his stated goal of being named alongside previous Los Angeles greats.

It will also erase all the failures of the past few seasons in a flash.

The post Costa signs with Galaxy: The “Flash” comes to Los Angeles appeared first on Last Word On Soccer.