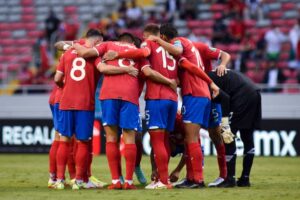 SAN JOSE – Costa Rica has made a few changed to the team that drew 0-0 against Honduras. Keysher Fuller is in at fullback, Celso Borges is in at center back; both Ricardo Blanco and Kendall Waston sit out. Bryan Ruiz is back in midfield along with Joel Campbell, Yeltsin Tejada and Johan Venegas. Veteran Jose Ortiz leads the line over Jonathan Moya.

El Salvador make just one change to the side that defeated Panama 1-0. Cristian Martinez is in for Narciso Orellana in midfield. Starlet Enrico Duenas stays in the lineup after shining, scoring the game winner on Thursday night.

El Salvador got a dream start as they took the lead. Duenas collected the ball in the final third and gave it to Rivas who laid it off for Henriquez. The number 17 rifled his effort from outside the box and beat Navas to score the opening goal.

Costa Rica respond with a flurry of corner kicks, but nothing doing. They nearly equalized off the head of Calvo, but Gonzalez denied him brilliantly. The half would end with El Salvador leading by a goal-to-nil. La Selecta were dominated in terms of possession, but Costa Rica couldn’t turn any of their seven shots into a goal. Both teams with two shots on goal.

Ronald Matarrita has been Los Ticos’ best outlet in attack, while Joel Campbell isn’t far behind creating a few chances. More is required from the pair into the second half. Hugo Perez will have to decide between pushing for a second goal and preserving another clean sheet.

A few minutes after the half, Costa Rica equalized. A back post header by the legendary Bryan Ruiz brought the crowd on its feet. Minutes later, referee Said Martinez pointed to the spot after Mario Gonzalez brought down a Tico attacker. Borges stepped up and gave Costa Rica the lead.

After many minutes of little action, Said Martinez brandished a red card to new sub Narciso Orellana after a foul. Down to 10 men, La Selecta couldn’t muster much. A great strike by Alex Roldan brought out a great save by Navas. A

An incredible second half implosion by El Salvador. Just an awful last 45 minutes, where the team was tired. They couldn’t create enough to give themselves a chance. The red card doomed them.

A much needed first win for Costa Rica. Three massive points have them above El Salvador in the table. Bryan Ruiz led the way, as always. Borges closed the door, Navas was great when he had to be.

Both teams will need more in their next game. El Salvador are home to Mexico, Costa Rica visit USMNT. Enough said, both teams need results.