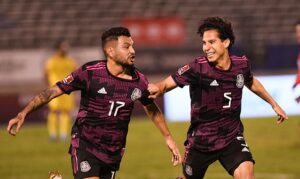 The Mexico National Team is in the middle of a slump. Their recent comeback win over Jamaica snapped a four-match losing streak and kept their World Cup hopes alive. The last window proved to be too much for Mexico, losing matches against CONCACAF rivals USMNT and Canada.

Despite getting a massive win on the road against a fiery Jamaican side, it was for from being a convincing win. After a red card decision brought the home side down to just ten men right at the end of the first half, things were looking like they were headed to a big win for El Tri. That never happened. In fact, Jamaica kept that fiery attitude and got the first goal of the match in the 50th minute. Mexico didn’t equalize until the 81-minute and was able to net the winner just minutes later in the 83rd.

That match, even in a win, was a continuation of what has been a startling trend for Mexico. An inability to score, and far from doing so consistently. It’s been six matches now where Mexico has failed to score more than twice in a match, the last time being a 3-0 win over Honduras in October 2021. Even more frustrating, aside from the recent 0-2 loss to USMNT, this has been a really dominant Mexico side in every other category. Often far more dominant in possession, shots on goal, pass accuracy, and opportunities.

Against Jamaica, for example, El Tri finished with 19 shots to Jamaica’s 3. They dominated possession 76%to 24% and had an 88% pass accuracy. Sure, they ended up with the win, and that’s always the most important, but it shouldn’t even have been close. Even without the red card advantage, the stage was set for Mexico to flex their strength and really get back to winning ways, proper.

As it stands, El Tri is sitting in third place in the CONCACAF standings, only two points off the top spot in what is an extremely tight race for World Cup spots. Mexico is back at Estadio Azteca tomorrow when they play host to Costa Rica. With only five matches left to qualify for a World Cup spot, every match the Mexicans play from here on out is a must-win. Especially when you consider how well both USMNT and Canada have performed as of late. El Tri will get one more crack at the Americans during the WCQ window in March, in what could determine the fate of either side. One thing is for sure if Mexico continues to play as bad and inconsistently as they have been, they can say adios to any hopes of seeing the 2022 World Cup.