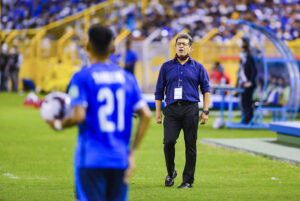 PREVIEW – El Salvador travels for the first time in the final stage of World Cup qualifying. They will face Canada at BMO Field on September 8 at 7:30 p.m. ET.

There will be much intrigue Wednesday night when El Salvador takes the trip to BMO Field to face Canada. The hosts are coming off a gritty and impressive 1-1 draw in Nashville against USMNT. La Selecta makes their first road trip of World Cup Qualifying after the scoreless draw against Honduras.

Adekugbe with the brilliant ball down the line to get Davies behind Yedlin, and that ball from Davies to create a tap in for Larin. #CANMNT #ForCanadapic.twitter.com/vTafEf567V

Canada will feel they could’ve and maybe should’ve stolen the three points against the United States. They showed tremendous fight to equalize through Cyle Larin, and to also produce decent goal-scoring opportunities after that. Alphonso Davies shined yet again, proving why he is the best player in all of Concacaf, a great assist as well as completing take-on. His fitness will be in question after being subbed off and going down with an injury, a player of his talents is a must-watch no matter he plays.

The great thing about Canada’s squad is their depth. Against the USMNT, substitute Jonathan David, Tajon Buchanan, and Jonathan Osorio entered the match and made an immediate impact. That bodes very well as squad rotation has been a theme for almost every team thus far, this being the third game in a little under a week.

Concerns for El Salvador and The Stakes for Both Teams

However, depth isn’t a strength for El Salvador. Hugo Perez deployed the same starting lineup against both the USMNT and Honduras, resulting in two home draws. While that’s not ideal, they go into this game against Canada level on points and goal difference. There’ll be a sense of urgency for both teams, as they both want to end this international break on a high.

Eriq Zavaleta left the Honduras match with a knock and may miss out. The bigger issue for El Salvador has been creating chances in open play. La Selecta has generated just one shot on target in each of its first two games. Joaquin Rivas hasn’t had much of a sniff in the box, while their most attacking outlet in Bryan Tamacas needs to do better with crosses.

That’ll spell trouble against a young and pacy Canada side, who know they can hurt El Salvador on the flanks. Mario Gonzalez has been superb thus far, making tremendous saves. The third and final match before the end of this international break is always important. Why? Because you simply never know what mojo your squad comes in next time around in October.