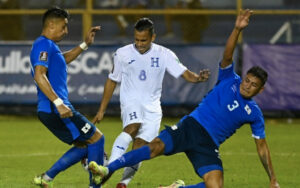 El Salvador and Honduras battled to a scoreless draw Sunday night. The first half gave was a cautious affair. A power outage in the second half breathed new life that gave late drama, both sides share points as they search for their first World Cup qualifying victory.

El Salvador puts out the same starting eleven that drew at home against the United States. Honduras produces an entirely changed lineup to the team that shared points in a 1-1 draw at Canada.

First Half: A toothless opening 45 minutes

Honduras won an early corner, just 20 seconds into the match. The ensuing opportunity was cleared away. The energetic start continued when El Salvador won a free kick in the fourth minute, but sailed over the bar.

The first yellow card of the game goes to Garcia for taking out Rivas in the 16th minute. Zavaleta also got in the referees book for a foul by the touchline. A chance nearly came for El Salvador but the cross on the ground went past everyone.

Tamacas had a decent chance to put El Salvador on the board, but his effort went wide of the far post. The first half ended. Rubio had the best chance for Honduras, his effort shot over the bar in the 13th minute. Just one shot on target combined from both teams tells the story. El Salvador was more than willing to own the ball, pass and look to break down Honduras. The long balls to Tamacas were promising but didn’t deliver much else. However, Honduras were more than happy to sit back and pounce on the counter attack.

The physicality was set from the opening whistle, 12 fouls — six apiece in this classic rivalry.

Edwin Rodriguez came on for Honduras in place of Quioto to start the second half.

Joshua Perez and Walmer Martinez subbed on for Ceren and Rivas for El Salvador. Zavaleta went down to the ground, injured alone. He would be immediately subbed off for Roberto Dominguez in the 63rd minute. Jose Velasquez entered the match for Rivas in the 64th minute.

Lozano had a wonderful chance to give Honduras the lead but the ball ricocheted off his body and out for a goal kick. Play was hated in the 65th minute when a few lights went out. After a 15 minute delay, the game restarted with a drop ball.

Honduras prepared another change in the form of Kevin Arriaga for Garcia. A total of 15 minutes were added after the 90, due to the power outage. El Salvador made their own double sub: Amando Moreno for Monterrosa and Enrico Duenas for Henriquez.

Martinez had a great chance to give El Salvador the late lead but he lashed his shot wide of goal. Honduras nearly stole the points but the shot on goal was heroically blocked by Tamacas. The barrage of corners nearly gave Honduras the lead as well, but a tremendous save by Gonzalez saved El Salvador.

After 111 minutes of play, a hard fought game ends scoreless.