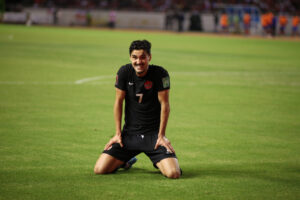 Canada may have suffered their first loss in world cup qualifying but the team is not taking their eyes off the coveted prize of a trip to Qatar to represent the country and attempt to bring the holy grail back to the great north.

Despite a tough loss on the road in Costa Rica head coach Jon Herdman feels his team did everything right.

“We could have stayed there till 2 or 3 am and that goal was not going to wilt and It looked like tonight the football gods were not going to give us what we needed so maybe it’s in the stars to qualify at home and for the first 20 minutes we knew it was coming,” Herdman said. “You felt the intensity in the stadium and you could sense we were starting to take control and after that the response was solid.”

Through 90 minutes, it seemed this team was not going to give up and showed they had the skill and talent to throw everything into it. Herdman believed that nothing was given to them and that they had to work hard to be where they are today.

“They had to fight and when they know that they are fighting for something to believe in which is to qualify this team and put respect in this football country and that brings us together and they truly care about this opportunity and they want nothing more than to bring this home for the country,” he said.

After the game, the Canadian men’s national team huddled together and Junior Hoilet was one of the players to speak. In his post-game scrum, he elaborated on his comments in the huddle.

“I just told them to look where we are, 10 men down and this team we are playing is still giving us respect,” Hoilet said. “The dream is not over yet and we have just have to go handle our business.”

Ismael Kone — who actually made his Canada debut after a pretty good start to the season with CF Montreal — spoke about how his first game representing his country went.

“It’s been crazy and to be called up as I wasn’t expecting it,” Kone said. “Like John [Herdman] said this is the time and I am happy to be here, happy to play and help my team win and get better.”

Milan Borjan — who has been a wall for Canada during this World Cup qualification and one of the reasons why they are in this position one win away — stayed positive after the game. Borjan said he feels this group is so tight that they can overcome any obstacle.

“First of all, I am very proud of my teammates being down 10 men for 70 minutes,” Borjan said. “It’s unbelievable. We dominated that game but it wasn’t meant to be and God wanted us to come back home and finish the job at home and celebrate at home with our fans. This team is a brotherhood.”

Atiba Hutchinson — who is one of the leaders of the team — also explained what was said in the post-game scrum about the huddle after the game.

“I told them we need to do what we have been doing and we have put ourselves in a very good position and we worked very hard, fighting for each other and being together and being tight as a team and enjoying the moment,” Hutchinson said. “I think that’s what we did today and there was a lot of positives to take from this game.”

What’s Next for Canada?

Canada now set their sights on Toronto and BMO Field. On Sunday, they will face Jamaica with another chance to complete the mission and qualify for the 2022 World Cup in Qatar this upcoming November. Another performance similar to their performance in Costa Rica — with a bit of more luck — Canada looks to get the job done.

The post Concacaf WCQ: Canada still focused on the goal despite setback appeared first on Last Word On Soccer.