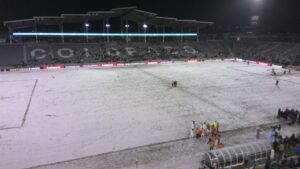 COMMERCE CITY, Colo. – Colorado Rapids hosted Comunicaciones FC in the second leg of the Round of 16 in Concacaf Champions League. Los Cremas were up 1-0 on aggregate thanks to a stoppage time goal. This was another frigid match at Dick’s Sporting Goods Park, with subzero Fahrenheit temperatures at kickoff. Snow just before halftime made this game officially Snow Clasico 4.

The Rapids started with much better energy and ball movement. Lucas Esteves was a catalyst down the right flank with Diego Rubio and Jack Price both getting looks early.

Tensions flared in the 13th minute when Auston Trusty went down after contact from Stheven Robles. VAR got involved and Robles was given a straight red for a serious foul.

Colorado dominated play after that with service into the box and runners into the gaps. They finally found the back of the net on 28 minutes. Keegan Rosenberry squared into the box. Max Alves, making his first start for Colorado, took a touch to control then buried it. The half ended 1-1 on aggregate with multiple Rapids corners.

Max Alves with a great finish takes the lead at home!#SCCL22 pic.twitter.com/Jotu8orIA5

The second half devolved into a pickup game as the snow blanketed the pitch. Juan Anangono had a chance at the near post on thew hour mark but his redirect was just wide. Michael Barrios was denied on a breakaway in the 80th minute with goalkeeper Kevin Moscoso coming off his line on a wayward touch.

Both teams got the ball in good areas, but like the first leg, struggled with the final product. Andre Shinyashiki and Jonathan Lewis combined to play Rubio in for a tap in. Colorado appeared to have won it at the death but VAR ruled the goal offside. The match headed to penalties with the 90 minutes ending 1-1 on aggregate.

The penalty shootout was a wild one. Jack Price was saved in the third round and then Santis shot off the crossbar in the bottom of the fifth. That was the first of six straight kicks that were unsuccessful. In total, three Rapids players were saved by Moscoso and one hit the crossbar. Samayao converted after Shinyashiki was saved to win it in the seventh round.

Moscoso MOTM: The Cremas goalkeeper was called upon many times during the 90 and made three saves in seven penalty shots. He was fantastic given the weather and his team being down a man for the better part of 75 minutes.

Playing down a man: Comunicaciones got stuck in. They gave up chances but put men behind the ball and defended for their lives. This might be the first time many of their players had seen snow, let alone played in snow. This might be the biggest achievement by a Guatemalan side in this version of the competition.

Craziest penalties ever: Does Opta keep track of penalty stats world wide? When was the last time six penalty kicks were missed in a row? Both keepers were excellent and the kick takers hit the post more than once. Fitting that the two leg series started with a bee/wasp nest on one crossbar and ended being decided in penalties with shots off the crossbar.