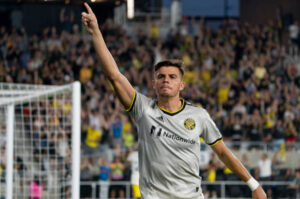 COLUMBUS – The Columbus Crew were victorious last night for the first time in six games. The win will do little for playoff hopes or to quiet the crowd of rabble-rousers who believe they hold all the knowledge of how to run a soccer team. Tonight at least, Crew fans can go to rest knowing their team earned all three points. Here is how the signature Hell is Real match up shaped up.

Columbus Crew Victorious in Classic Hell is Real Match Up

Lighting in the right leg

In the 45th minute, Lucas Zelarayan unleashed an upper 90 free-kick that sent the Lower.com Field into a frenzy. It was his 5th free-kick goal of the season. He celebrated by emphatically pointing to the Columbus roundel badge on his jersey— a more passionate showcase than his Michael Jordan shrug after his 2nd goal against NYCFC in May.

It had been an up and down half to that point. Lucas Diaz hit the woodwork on a golden opportunity from Derrick Etienne Jr. and it felt like if The Crew could muster one goal the entire season would be fixed. Cincinnati came to play though. The blue and orange held their own, controlling possession through the middle of the half. Cincinnati’s biggest mistake was fouling too close to the box, something no MLS team should do if they want to beat The Crew. As he is known to do, Zelarayan made them pay.

Nothing gold can stay

Before the jubilation of Lucas’s freekick even wore off, Cincinnati equalized. Isaac Atanga unleashed a screamer from outside the 18-yard box. Eloy Room had no chance. The Crew defense was slow to close out space as Atanga collected himself. He made sure to capitalize on the moment. Both teams would enter halftime as equals.

The second half had its moments early. Jonathan Mensah couldn’t steer a Zelarayan free kick service past Kenneth Vermeer. It was clear Columbus was pushing for all three points. Inevitably, Columbus got caught forward. After a Columbus corner kick, FCC got their break and countered the length of the field to take the lead in the 74th minute. Lower.com Field never felt so low.

A mere two months ago Miguel Berry introduced himself to Columbus by scoring an equalizing goal in the lion’s den of Cincinnati. He made it clear he did not want to be just a guy who scored one meaningful goal. Since then, his opportunities have been limited. Tonight he took a giant leap into Crew lore.

Pedro Santos let loose a low diving shot from about 22 yards out. Cincy keeper got his hands on it, but only enough to parry it into Berry’s path. The kid from Barcelona made sure to bury it and the game was tied.

Right from the restart, Alexander Matan made an aggressive run to the touchline. In this stretch of losses, The Crew have looked less than confident. That phrase would not characterize Matan or Berry last night. Matan’s cross bounced and rattled off of a couple of bodies, most notably the midsection of Miguel Berry, before finding the back of the net. Columbus had taken the lead.

The game would finish 3-2. The Columbus Crew were victorious. The north end chanted the name of their new hero. An entire month of hardship and despair was washed away. All of a sudden the team and the city could rejoice. Teammates embraced and jerseys were launched into the stands. The excitement was palpable but above all, everyone was relieved to be a winner once more.

In a game that can feel so futile at times, soccer allows you these moments. Signature nights encapsulate an entire season. Each new year is a collection of short stories punctuated by conflict and resolution. For the past six games, The Crew had endured quite the conflict and tonight, they found the right protagonist to write a happy ending.

No matter how the rest of the year shakes out tonight will be a pillar of what 2021 means for this team. For better or worse, it will provide hope to fans and players alike. Tonight was not a masterclass, neither of Berry’s goals will win goal of the year, the defense looked spotty at best, but none of that matters at this moment. This time the Columbus Crew are victorious.

The post Columbus Crew Victorious in Classic Hell is Real Match Up appeared first on Last Word On Soccer.