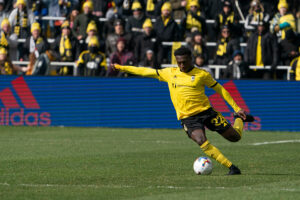 COLUMBUS, OH – Columbus Crew SC did not start the game well against Trillium Cup rivals Toronto FC at Lower.com Field. They had chances to score in the first half but still gave up five shots on goal to TFC in the first half.

However, they were able to turn the game around thanks to a dominant second-half performance. This was where Columbus scored two goals to win the game over Toronto.

Columbus Crew with a comeback victory at Lower.com Field

Toronto FC did not pass the ball well in the second half.#CLBvTOR | 2-1 | #MLS

Noble Okello had a good start to the game with two shots on target in the first six minutes of play. Luca Petrasso’s passed the ball to Okello who got a good header in the sixth minute and almost scored. Unfortunately, in the 12-minute, Jahkelle Marshall-Rutty was forced to leave the game because of an injury. He was replaced by Ifunanyachi Achara.

14’ The road team, #TFCLive, opens the scoring! An excellent cross from Alejandro Pozuelo leads to a goal for Jesús Jiménez! #TorontoFC#CLBvTOR | 0-1 | #MLSpic.twitter.com/Msf0ttAszZ

Jesús Jiménez scored thanks to a great cross from Alejandro Pozuelo. The play was also set up perfectly by Ifunanyachi Achara. The play looked like it came from the training ground. TFC had an excellent first half and it showed with that goal.

MacNaughton made a terrific defensive header in the 20-minute of play. This was followed by a solid defensive play by Jayden Nelson on Etienne Jr. A nice pass sequence between Petrasso and Jiménez almost resulted in a goal for Toronto FC in the 27-minute of play.

Achara got the pass from Pozuelo in the 49-minute. However, Achara’s shot was stopped by Columbus goalkeeper Eloy Room at the beginning of the second half. Unfortunately, that was the only shot on goal Toronto had in the second half against Columbus.

This was a great individual play by Lucas Zelarayán. However, once again, he found space to get a shot off in the 56-minute to tie the game.

65’ #Crew96 scores! Following a set-piece, Derrick Etienne receives a pass from Jonathan Mensah. Etienne’s shot deflects off a Toronto FC player and into the back of the net! #ColumbusCrew#CLBvTOR | 2-1 | #MLSpic.twitter.com/yYWqrXo3i2

This was discussed in the three takeaways at the end of the game. However, the set piece that led to the goal was controversial. Okello got a yellow card for winning the ball against Columbus’ Pedro Santos. The goal itself though was not controversial. TFC were defending too deep on their lines.

It was unclear if the pass from Jonathan Mensah was intentional or not. It looked like he was trying to head the ball. Either way, the ball came to Etienne’s foot. His shot deflected off a TFC player and went into the back of the net.

Zardes in the 71-minute just missed the target.  Luis Diaz’s shot was wide open in the 80-minute. Etienne gave him a great pass to a wide-open net. However, Diaz’s shot was off-target. Lukas MacNaughton made a terrific tackle in the 86-minute.

Toronto FC was the better team in the first half. However, the Columbus Crew SC completely dominated the second half as TFC only had one shot on goal in the second half. It was a second-half to forget, but maybe Toronto deserved better as the second goal was a bit controversial.

.@detienne_10 is the @Nationwide Man of the Match

Nevertheless, TFC now has only one point in three games while Columbus has seven points in their first three games. There were some bright spots for TFC though. Lukas MacNaughton and Kadin Chung had good games, particularly in the first half. For example, MacNaughton made a terrific defensive header in the 20-minute and a great tackle in the 86-minute.

Also, Kadin Chung made a terrific tackle in the 29-minute to prevent a sure goal-scoring chance. Both Chung and MacNaughton made their MLS season debuts against the New York Red Bulls last week.

Before the international break begins, TFC will play on Saturday, March. 19 at 3:00 p.m. ET. They will face DC United at BMO Field. They will then travel to face New York City FC on April 2 at 4:00 p.m. ET. Both games will be televised nationally on TSN. The DC game will be shown on NBCSW and dcunited.com.

Three takeaways of the game at Lower.com Field:

Game Ends:@ColumbusCrew 2@TorontoFC 1#Crew96 dominated the second half and as a result, came from behind to win their #MLS home opener.

The injuries are starting to pile up for Toronto FC. An unfortunate injury to Jahkelle Marshall-Rutty in the 12-minute is a big concern. Especially, when it looked like he went down without any contact on the player. However, there are also other injury concerns. Shane O’Neill has some injury problems and did not play for the game against Columbus.

The lead-up to the goal was controversial. As dominant as Columbus was in the second half, they probably should not have won the game. Okello got a yellow card in the 64-minute as he got the ball before Santos of Columbus. Santos though embellished the play and went down. This resulted in the free-kick and the goal that was scored by Derrick Etienne Jr.

The Trillium Cup is still anyone’s to win. It is important to note that Toronto played on the road for today’s game at Lower.com Field. Also, Toronto did score a road goal, which might be important for determining who will win the Trillium Cup. The Trillium Cup winner will be determined on June 29, 2022, at BMO Field. Toronto won the last three Trillium Cups, including the one last year.

The post Columbus Crew SC came from behind to win at Lower.com Field appeared first on Last Word On Soccer.