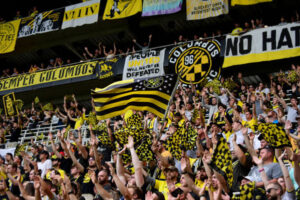 PREVIEW – The Columbus Crew return to their home confines of Lower.com Field for a mid-week tilt against D.C. United. It will be the 17th game of the 2021 season for both clubs, and as we inch closer and closer to the halfway point of the season the importance of home wins at Lower.com field becomes more paramount.

Three keys to the game for the Columbus Crew vs D.C. United at Lower.com Field

Put Friday in the rearview

Very little can come from rehashing Friday’s 4-1 thrashing by New York City F.C. It was a game in which the Crew looked dull and uninspired. While the past month has shown this year’s version of The Crew is one with some grit and tenacity, that edge we’ve come to expect did not make the trip to the big apple with the rest of the roster.

Most fans and followers of the league will probably be willing to give The Crew a pass for Friday. We can blame it on the unusual dimensions of Yankee Stadium. Others will point to the injuries and international call-ups that have stretched the roster thin. The truth is New York is a good team, but if the Crew are to also compete for the top of the east they need to prove Friday’s lackluster performance was an expectation, not the norm.

Good teams beat up on the bottom of the standings

A great way to show everyone this team is for real is by taking advantage of a weaker opponent. This is how to make the playoffs in MLS 101. In their previous match up The Crew were coming off a 3-0 loss in Monterrey, Mexico in the second leg of their Concacaf Champions League match-up with the Rayados. It was a chance to bank three points and savior a home win in the old Crew Stadium.

The Crew took care of business thanks to a Zelereyan free-kick and two own goals. The early May victory earned The Crew three points that have gone a long way in helping this team tread water above the playoff line for the first half of the season. A resounding win would give the yellow soccer team some breathing room in the playoff race, and it is exactly the result fans should expect from the defending champs.

Columbus Crew need to harness the energy of Lower.com Field

Did I mention last Friday the Crew looked lifeless? Sure, a better play here or there could have changed the course of the game, but the Crew were outplayed. The three home games in Lowe.com Field have been electric. The crowd has poured energy onto the pitch. It still feels like a powder keg ready to burst. Aside from a Zelereyan master class of a free-kick, there really hasn’t been the explosion of intensity the new stadium has been begging to unleash.

I’m not asking for Wednesday night to be a carbon copy of the 2008 Eastern Conference finals. Fans should still expect this team to win in a convincing fashion. Even though the season isn’t halfway done, the stakes are starting to rise. The points needed for The Crew to make a run in the East will probably be won at home. (we all know the away record) A satisfying win at the new stadium would be a great start.