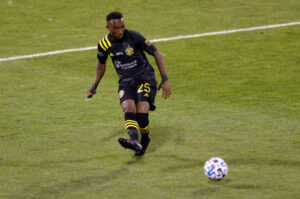 COLUMBUS, OH. – Columbus Crew SC hosted Real Estelí on Thursday night in the second leg of the Concacaf Champions League Round of 16. A birth in the CCL quarterfinals was on the line. The Crew were spectacular in the first leg, winning 4-0.

Columbus manager Caleb Porter chose to be pragmatic in this game, putting out a mostly reserve lineup. His side open up the MLS regular season on Sunday, giving them just just two rest days between games. None of the goal scorers started in this match. Just three starters from the first leg started this game.

Estelí came out with good energy and was dangerous on counter attacks, but the home side limited their opportunities. Columbus was at their best on set pieces, similar to the first leg.

Aidan Morris appeared to injure his left knee just minutes into the game. He was subbed out in the 9th minute for Grant Lillard. Morris was stretchered off and later seen with crutches.

The best chance in the first half came 32 minutes in when Bradley Wright-Phillips found Isaiah Parente in space, but he was offside. The best chances in the second half came on several consecutive corners for Columbus starting in 52nd minute.

That was until a counter attack in the 86th minute when BWP scored. Lucas Zelarayan delivered a great through ball between the lines and Wright-Phillips scored on his first touch.

Other than that, it was a boring game devoid of chances. Just the way the Crew wanted it. The match ended 5-0 with Columbus advancing 5-0 on aggregate to the CCL quarterfinals.

Welcome to @ColumbusCrewSC, @BWPNINENINE! He scores his first goal for the club

Three Keys to the Game:

Aidan Morris out hurt: This game was tough from a depth injury stand point for the Crew. Morris looked good in the first leg but went off with a non-contact injury. It appeared to be his knee. Given there was no contact, it doesn’t bode well for the teenage midfielder.

Job done, who cares if it was boring: Other than the late goal from BWP, this game wasn’t super fun to watch. Columbus clearly was playing based on the score line. Porter and MLS fans couldn’t care less with the result going in their favor.

MLS goes 5 for 5: With that, all five MLS teams in this tournament made it out of the Round of 16. Five of eight teams in the quarterfinals are from MLS with Liga MX making up the other three.