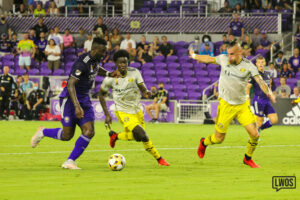 The Columbus Crew drop three points to Orlando Saturday night in a 3-2 loss. The defeat was the fifth straight against Orlando, and The Crew’s seventh loss in eight games. Columbus managed to tie the game in the second half only to give up the lead in the 69th minute. The Crew were without captain and star center back Johnathan Mensah, who is away on international duty with Ghana.

Here is what we can take away from another loss.

In a hole early

Saturday was the sixth time this season the crew went down 2-0 before halftime. Of those six games, Columbus has lost four times and tied twice. It is incredibly difficult to even tie a soccer game after getting in such a hole. Saturday was no different.

Orlando’s star striker, Daryl Dike buried an absolute rocket past Eloy Room. A handful of seconds later, Silvester van der Water threw a long cross into the box that missed everyone in purple, grey, or green on its way into the net.

Both goals felt avoidable. In the same way, The Crew’s run of play feels like it should be avoidable. If a guy can get to this spot sooner, and if that touch isn’t as heavy maybe they’ll tie. At a certain point, a team’s run of form is no longer an abrasion, but rather indicative of who they are as a team. Right now, the Columbus Crew is a team struggling in every facet of soccer.

In fairness, The Crew didn’t go quietly into the Florida night. In the 52nd minute, they caught a break from a rather impressive own-goal from Orlando defender Antonio Carlos. It’s the fourth own-goal Columbus has gotten this season. Caleb Porter will take a goal anyway his squad can get them this year.

Two minutes later Miguel Berry equalized, and it felt like everything was right in the world. Derrick Etienne laid off a beautiful touch pass into the box that Berry ran into and smashed past Orlando’s keeper. It was Berry’s third goal in two games and his fourth of the year. The Spaniard is taking advantage of the minutes he is getting as Gyasi Zardes recovers from a hamstring injury.

An off night from Lucas Zelarayan

It would not be fair to expect a free-kick goal from Lucas every night. We are blessed he has done so much to keep this team’s playoff chances where they are. He has made it known he feels a yeoman’s burden to perform for this team.

Tonight, unfortunately, was not his best. Two free-kicks into the opponents’ wall and five corners did not result in much of anything. Most notably, he was the last Crew player to touch the ball before Orlando took the lead.

Zelarayan’s a fun player b/c he does stuff like try to dribble the opposing team’s best ball-winner at the top of the box after tracking back and making a nice defensive play.

Man’s gotta have a code. pic.twitter.com/Pk3DLNybpw

That is a rather difficult spot to do much of anything with the ball, but any decision would have been better than the one he chose. Perhaps, it says more about the players around Lucas, that on one of his off nights, the Columbus Crew drop points.

Crew fans could be forgiven if they turned the channel to College Football after the first half. They would have missed out on a Miguel Berry goal, but other than that…it can be difficult to try to continue to make sense of this stretch of defeats. How could the defending Cup Champions fall like this? How are they still close to the playoff line? Who angered the soccer gods to cause so many injuries?

The answer is as simple as it is frustrating—that’s soccer. It is a game of inches and continuity. Perhaps last year’s playoff run led many of us to overvalue the talent on this team. The ball bounced right so many times in Columbus’s favor that it felt like they could do no wrong. This year it feels like we can’t get it right.