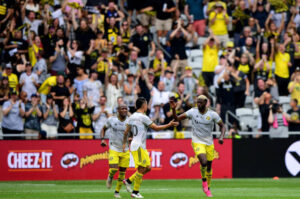 COLUMBUS, OHIO – The first game at Lower.com Field was something else on Saturday afternoon. Columbus Crew hosted New England Revolution in front of a packed house. The atmosphere and play on the field were befitting of the occasion.

The Crew came out playing like their hair was on fire. In the opening 10 minutes, they had three positive sequences in the final third.

Against the run of play, Tajon Buchanan would score the first goal in stadium history. DeJuan Jones made a great run forward on the counter attack. He crossed the ball at the touchline to the back post, finding Buchanan for a smashing header, unmarked.

Columbus continued to be the more aggressive side, throwing numbers forward to find a goal. New England, however, would make it 2-0 at the half hour. After an unsuccessful corner, New England won the ball on the clearance. They recycled to Buchanan, who made a good run into space. Buchanan threaded a cross past goalkeeper Eloy Room to Gustavo Bou for a tap in.

Just before halftime, Columbus pulled one back. Gyasi Zardes collected the ball at the top of the box, danced around to face goal and create a shooting lane, and beat Matt Turner inside the far post. The half ended 2-1.

The Black and Gold started the second half the same way they did the first. They struggled to find an equalizer against a compact Revs side until the 69th minute.

Liam Fraser played a long ball to Zardes out of the back. It deflected off Andrew Farrell and towards goal. He and goalkeeper Matt Turner raced to prevent the own goal, but they bumped into each other, both missing their clearance attempt, with the ball rolling over the goal line.

Zardes was right behind them and did push both in the back. VAR did not have Alan Kelly go to the monitor. The play stood as an own goal to Farrell. The home side pushed for a winner in the final 20 minutes but couldn’t find one. Farrell redeemed himself with a goal line header to prevent a winner in stoppage time in front of the Nordecke.

Just how we drew it up pic.twitter.com/B0gUW0X7DT

Another great soccer-specific stadium: MLS has been killing it with new stadiums this year. The crowd was fantastic. This game had a playoff feel to it, in the stands and on the field.

Belated Canada Day: At halftime, Tajon Buchanan had already put in a MOTM performance. A goal and assist sees him continue his great form ahead of him joining the CanMNT for the Gold Cup.

Farrell own goal: It was the decisive and most memorable play of the match. Farrell was unlucky on the play in multiple ways but did redeem himself in stoppage time with the clearance header.