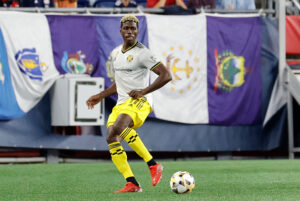 The Columbus Crew defeat Club de Foot Montréal by the score of 2-1 Saturday night at Lower.com Field. It was the Crew’s third straight win at home. Three-point outcomes are becoming more and more necessary for the club’s playoff hopes. The result tonight over a team higher in the standings, certainly, bolsters Columbus’s belief that they are in fact a playoff team. Let us take a look at how the Columbus Crew earned all three.

The city of Columbus has experienced some crisp fall weather in the past 48 hours. With the drop in temperature, the MLS season sees a rise in intensity as the post-season draws near. Saturday’s matchup pitted two teams battling for a playoff spot.

From the opening kick, The Crew attacked their front foot. Pedro Santos made a number of attacking runs off the wing in his return to action. Josh Williams found himself playing quarterback, launching deep balls into the channel. The strategy was obvious, take the game to Montreal.

A consequence of such tendencies is the risk of fouls and counterattacks. The first half ended with nine fouls called against Columbus, punctuated by a yellow card to Williams in the 39-minute.

It was clear Saturday would be a make-or-break.

By the 44-minute the game was headed towards a scoreless first half. That was until Milton Valenzuela won a tackle in midfield. The Crew midfield bounced the ball around, which gave Derrick Etienne time to charge down the left flank. Liam Fraiser found Etienne, who after making a cut inside the Montreal defense, played a beautifully lofted pass into space. Zardes never broke stride as he sent the volley into the back of the net.

The finish and build-up were a masterclass in Columbus Crew scoring. A run of a play goal that has been missing for a large part of the season. Diagnose the team’s lack of scoring however you want, but tonight on their first goal, The Crew showed everyone watching what they are capable of.

A brace for Zardes

The second half kicked off with the same bite and intensity the first half had. Etienne was shown a yellow for pointing to the scoreboard in the midst of an altercation. A classic Columbus sports gesture if there ever was one.

Lucas Zelarayán came off the bench in the 59-minute. A substitution from Caleb Porter indicated his desire to keep the throttle down.

The tenacity and defensive press paid off again in the 62-minute. Darlington Nagbe won the ball in midfield and found Zardes with acres of space in the Montreal half. Zardes collected the ball worked towards the center and realized the defense was going to let him have room to deliver the ultimate strike into the upper 90.

AN ABSOLUTE WORLDIE FROM @GYASINHO

In the post-game press conference, Caleb Porter outlined all the things that went right for the Columbus Crew tonight. The team had their ideal back four defenders. The mid-field three worked incredibly hard. Most importantly they did not let Montreal control much of the game. These factors come together to deliver one ultimate conclusion; this is not the same Columbus Crew from the summer.

Across the board, every starter and sub played well. There were moments that weren’t perfect, but nothing in soccer can be. What is important is that this team believes in itself again.

There have been moments in the year where fans might have thought they were turning a corner such as a draw at Cincinnati, the last game at Mapfre Stadium, the first 80 minutes against Seattle but none of these materialized into results.

Right now, on the doorsteps of October, it’s time to see what this team is made of. If Saturday can be any indication, we all will be surprised by what they can achieve. Their next game is in the Campeones Cup Final against Cruz Azul at home. This was on September 29 at 8:00 p.m. ET. They will then travel to the road at Subaru Park against the Philadelphia Union. The game is on October 3 at 4:00 p.m. ET.