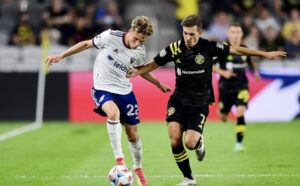 The Columbus Crew got crushed, 4-2, on Wednesday night by D.C. United.

Three Thoughts on The Columbus Crew 4-2 loss to D.C. United

It can’t just be Lucas.

The inept nature of The Columbus Crew’s offense was never more apparent than it was this Wednesday night, especially in the first half. Time and time again the crew had possession in the attacking third only to look uninspired and tactless when confronted with the opportunity to score. The Crew have one, if not, the best-attacking 10s in the league. Unfortunately, every team defending Zelarayan knows he oftentimes has no outlet. Lucas is begging for someone to play off of.

Last season, Pedro Santos filled that role. This year, Santos has had to shift farther back to a defensive role. Without a legitimate attacking wing, opponents smother Lucas and let The Crew’s lack of options fizzle out.

Having Gyasi Zardes back for this month will help. It’s no surprise the Crew scored their two goals when he was on the field, but look further down the calendar and you’ll see more USMNT games in September. There is a decent chance the former Columbus Crew manager Gregg Berhalter will call on his trusted number 9 to head his attack now that the national team games have an adding level of importance.

Eloy Room is one of the best keepers in the league. Johnathan Mensah should be in every conversation for defender of the year. Aboubacar Keita looks far more confident and reliable than he did just last year. Tonight, the collective defense just wasn’t on their game. A week ago there was talk about this being the best defense in the league. Fans shouldn’t rush to call for anyone’s job, but the wall isn’t nearly as strong as it might appear. Often D.C. was able to penetrate deep into the Columbus third by way of the corners leaving much of the squad to defend facing their own goal. A recipe for disaster that United took advantage of on their 2nd goal.

Until tonight (and Friday) the squad was treading water. The back four and keeper keeping everyone afloat. Tonight the other shoe dropped, and we were left with an embarrassing loss at home against a team that will be lucky to make the playoffs. If the Columbus Crew continue to put forth that type of effort, they too will be lucky to play past November.

Much was made about this season’s ideal starting 11 being one of the best in the league. With the news of Artur’s hernia surgery and Valenzual’s continued absence, it feels like we’ll never see what that lineup could accomplish. Instead, Caleb Porter has opted to employ the “next-man-up” strategy. While that may work here and there, this team is well beyond needing band-aids. The backline is depleted. Tonight proved that.

The guys who have stepped up are admirable, but they aren’t the real deal. We can’t count on Waylon Francis to play like the all-star he was in 2015. Keita is still young and susceptible to mistakes that result in easy goals like tonight (Head up kid the future is still bright). Porter is stubborn and he’s earned the right to be that way, thanks for the cup by the way, but things need to change. Three in the back will give the team a little more of a foundation. It will open up the wings for guys like Diaz and Matan to really create. Fill the middle with Nagbe and Lucas and see what they can do. It can’t be any worse than what we saw tonight.

Last Words on Crew vs. DCU

Redemption is right around the corner. This loss would feel much worse if there wasn’t an entire half of the season to play. Saturday at Lower.com Field looks like a great chance to right the ship. Zardes will most likely start, and if we are lucky maybe someone from the injury report will make their way back on the field. It is important to remember that all is not lost. This run can be forgotten in a month if things are to turn around. The squad has the talent to do it.

Kevin Molino found the back of the net, finally, and Lucas still has plenty of lighting in that right foot. This league’s history is built on teams in shiny new stadiums making late-season runs to the playoffs. It’s about time Columbus has their shot at that character arch.