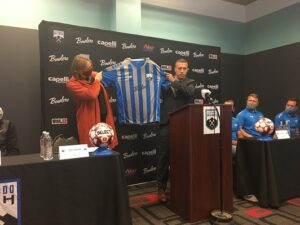 LONE TREE, Colo. – In January of 2020, I got a DM on Twitter inviting me to a press conference the first week of February. It was taking place at some bowling alley I’d never heard of called Bowlero in a Denver suburb. Colorado Rush, one of the top youth soccer clubs in the state, were bringing a USL League Two team to the Front Range.

After a few hours of speaking to Joe Webb (then Director of Coaching) and his staff, I walked away cautiously optimistic about a group of hardworking and talented people looking to add a path to professional soccer to their youth club. A month later, that optimism was gone as COVID-19 brought the United States, and all of sports, to a halt. The League Two season was canceled. Over a year later and after another press conference, the Rush are re-starting and ready for 2021.

Colorado Rush are Back Stronger for 2021 USL League Two Season

“I’ll never forget the disappointment of the staff and the team when hearing the news of the cancelation of our 2020 season. I’m proud of the staff and everything that we did during 2020 to keep this program alive during this time period. The staff has shown so much resilience and tenacity to keep things right on track for 2021. And there are unfortunately plenty of businesses and soccer franchises that will not return from this pandemic. But I’m grateful we are not one of them,” Webb said.

The league and its clubs have taken much into consideration to ensure this season will take place with COVID not yet defeated. Each team will have a designated health officer, who’s duties will include daily health checks with players. Players will be required to be in a bubble for the duration of the season. Given how last year’s USL Championship went, iterative learning has clearly taken place at the league level.

Rush will be playing their home games at Denver Christian High School in Lakewood and training will be hosted at Long Lake Regional Park in Arvada.

They are anticipating the ability to have fans at games. Season tickets are on sale starting at $49, right now including six league and two preseason matches. I wasn’t able to find a stadium capacity for Denver Christian’s football stadium but it looks like a typical high school football stadium of bleachers; the club will be following CDC guidelines at all home matches. Additionally, Stream It Sports will be broadcasting home games online with no paywall.

Elliot Prost and his charming French accent are back this year in the Head Coach role. While Rush has traditionally played a 3-5-2 at various age groups across the program, he’s been given full control of tactical and personnel decisions.

It’s easy to tell that the club has done their due diligence in building the team. Prost told Last Word that it’s a group effort when it comes to scouting and agreeing on which players to bring to the club. The 2020-21 college soccer season was truncated, limiting player development and game film. Prost and his staff have leaned into college coaching connections they made going back to 2019 to get player recommendations.

“It’s all about it’s about relationship that we’ve created with college coaches and programs and also the network that comes with all the staff, but also the Rush brand,” said Prost, adding “if last year’s roster were to better than this year’s roster, we wouldn’t be doing our job right.”

They’ve also leaned into known quantities of players they’ve already scouted and worked with. Approximately half of the roster is made up of players who were set to be on the team last year. A good portion of the roster has come from the Rush network. The club will have an international makeup, with players from France, Germany, Australia, and New Zealand. Most of the roster is around 22-years-old.

Colorado Rush has partnered with Next Level Sports Performance, who will be emphasizing fitness at altitude and player safety. Next Level has done clinical work with former COVID patients and will be taking that into account for player who have or get COVID during the season. Kylie Clark is a concussion specialist at Next Level and will be emphasizing player safety as the USL tests out concussion substitutions this year.

Rush will be playing a 10-game regular season in the Mountain Division, alongside Park City Red Wolves and Ogden City. The first day of training is Tuesday, May 11. They’re first preseason game will be against GAM United on Friday May 14 at 7 PM MT. The opening game of the regular season will be a home match against Park City on Friday, May 28 at 7 PM MT.

Rebecca Smith, a Rush mother of two, has already taken the initiative of starting a supporters group. The Rush Twelfth Mountain Division, a play on the twelfth man, will be supporting the players at every home game. They’ve yet to launch their social media accounts, so stay tuned for more details. A decision has not been made regarding a potential supporters group membership fee.

I’m glad Colorado Rush are bringing a USL League Two team to Colorado. I’m excited for the full pyramid to be represented starting next year with Northern Colorado joining League One. I’m curious to see what the talent level is with this team. That’s not an expression of faith or doubt; I just don’t know given 2020 and the state of the fourth division of soccer in this country.

The Rush has a group of hardworking honest people who didn’t stand still last year when the season got canceled. They’re coming into 2021 with new wisdom as if they did play a season last year. That’s good for the club, Rush soccer collectively, soccer in Colorado, and ultimately soccer in this country.